The Witches and The Queen’s Gambit both premiered on HBO Max and Netflix this month, and what a showdown for these two 60’s style fashion flicks! The Witches is based on Roald Dahl’s book of the same name and features Anne Hathaway as ‘The Grand High Witch’ and Octavia Spencer as a Grandmother from the Deep South taking care of her newly orphaned grandson. A departure from the original film which included Anjelica Houston, The Witches 2020 was reimagined to include 60’s history in America, including stereotypes that whites had of prominent black people (and Octavia Spencer’s character), especially as most of the backdrop of the film takes place at a luxury hotel in Alabama.

The Queen’s Gambit relates a similar storyline for the lead character, orphaned at a young age Beth Harmon (played by Anja Taylor-Joy) becomes a chess prodigy at age 9, excelling to become one of the best chess players in the world. But you HAVE to see the film and the series for yourself-the acting, the storyline, the 60’s backdrop-and did I mention the fashion?!?! Check out our absolute fave looks from each-and our fashion recap into the plot lines and how fashion tells its own story, below! CAUTION: this article does contain spoilers!!

Before revealing herself as the official Grand High Witch, Anne Hathaway channels some major 60’s style with this bright pink coat and bob hairstyle, inspired from 60’s celebrities and supermodels-she nails it!

The opening scene in Episode 1 of The Queen’s Gambit starts with Beth Harmon frantically getting ready for her chess match after a night of heavy partying. She dons this green and black number an and let’s just say hungover or not, she nails this feminine yet modern (at the time) look for her Paris tournament. 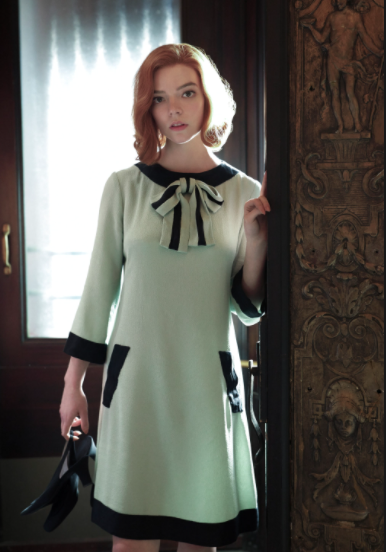 Anne Hathaway’s character is unapologetic and bold and her fashion style accentuates it. This purple one piece dress with fluted, pleated sleeves and a bouffant hairdo is the perfect way to say ‘I do as I please’ and we’re here for it!

The Queen’s Gambit chronicles the life of orphan turned brilliant chess player Beth Harmon, but it also tells her coming-of-age story through her changing fashion and hairstyles. ‘Teen’ Beth comes into her own and is seen here in a stylish mini skirt and blouse, a sharp contrast to her more reserved looks in earlier scenes. 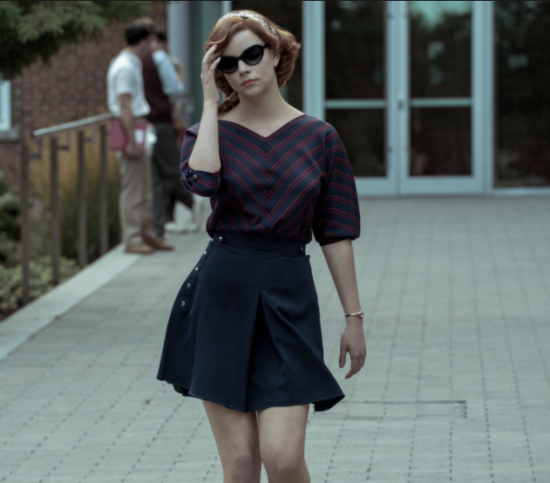 Who said playing a Grandma would be boring?! Octavia Spencer uses color and bold prints to show she’s not just a grandma, she’s a stylish woman with a sense of taste and confidence in her persona. We love!

Coming into her own, Beth Harmon has already proven she’s brilliant at playing chess and chess strategy, but as her chess playing begins to take her to international destinations, her style also evolves into a more feminine and mature style. 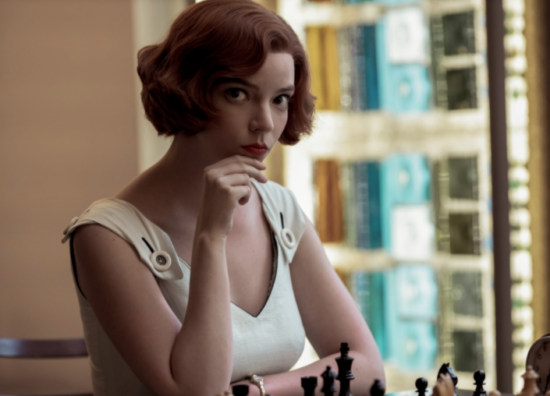 Two time Oscar nominee Joanna Johnston was responsible for creating the magnificent costumes of The Witches, and featured below is one of my favorite -and most memorable-looks from the movie! Fierce and fashionable-and a Marie Antoinette style bouffant?! How can you go wrong??

The Queen’s Gambit not only tells Beth Harmon’s coming of age in 50s/60s America and entering into the male-dominated world of chess, but also the struggles of a young addict going in and out of dangerous binges. Seen here Beth is coming off a week-long drug and alcohol binge and is confronted by a former boyfriend. While it may be a telling scene speaking to the disillusionment many addicts face in confronting their issues, the fashion sense is completely on point as Beth is entering into the end of the 1960s and her style is befitting the new pop-culture that embraced a less conservative society, and looks that would make 70s fashion a staple of the decade. 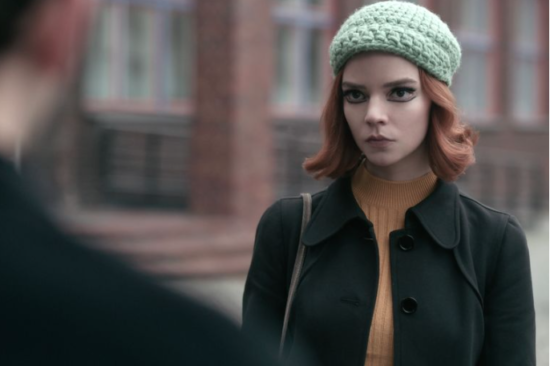 Let me start by saying Stanley Tucci is truly a chameleon and can play any role, and as the Manager of the luxury hotel in the 1960s, he’s rigid yet a pushover, derogatory yet loveable, and we love this 3 piece pinstripe suit with a red flower pin he’s wearing in this scene…chic!

The cover of the movie and one of the biggest fashion scenes from The Witches is when the witch coven enters the hotel and they’re all dressed in their finest including hats, turbans, houndstooth suits and long gloves, they may be a fierce and cruel witch coven but their fashion is totally on point! No wonder they chose this image for the cover!

After winning a championship chess match in Russia against on of the best chess players in the world, and elevating herself to ‘Grandmaster’ status, Beth Harmon decides to take a leisurely walk through a park-and is wearing this all white look. One of my absolute favorites of the whole series, Beth is sophisticated, cultured, and completely on trend with this look! 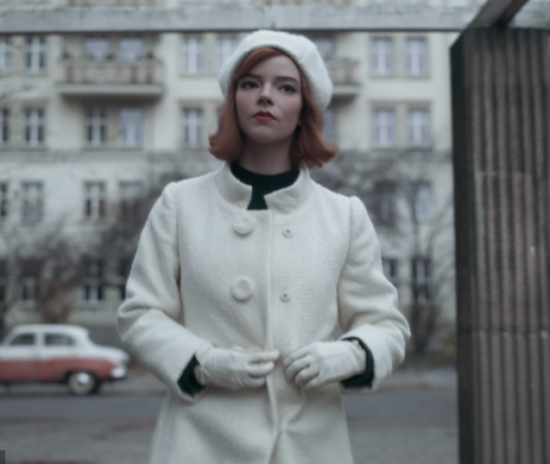 Who doesn’t love Octavia Spencer?! The answer=no one. And I for one am loving this floral jacquard 60s look on her. It speaks to the fashion of the time, but also the role that fashion can play in elevating the status of someone, especially Octavia Spencer’s character who came from poor circumstances as a child to be staying -at the curiosity of many staff and guests of the hotel-at a luxury resort.  We love this look on her (and I’d totally wear this print today!)