Fashion posts can be fabulous and magical; yet if you look closer, there is usually a story behind them. Sometimes certain profiles have a special and intimate effect and must be shared. Such is the case with James Daugherty and his stunning designs. Do you happen to know who James Daugherty is? Well, I am about to enlighten you. 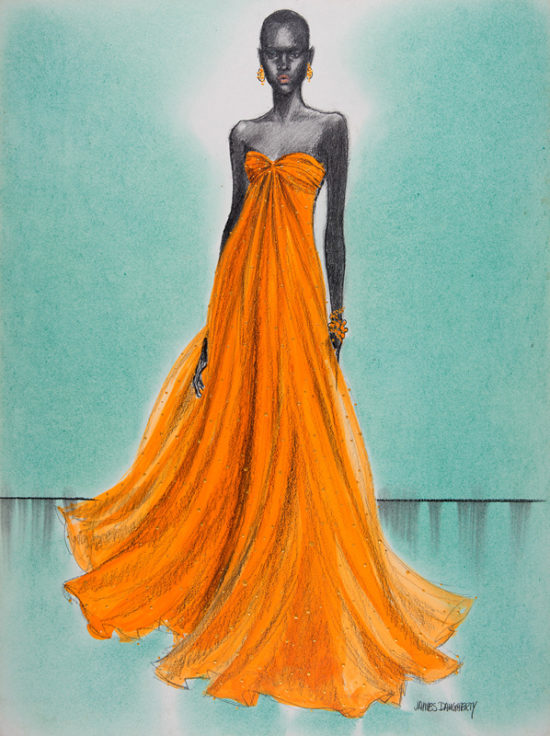 My mission in fashion and writing has always has always stemmed from original trailblazers. I like to cover designers and artists (fashion, jewelry, contemporary artists) that make an innate, original and emotional impact upon people. Hopefully designers that inspire others the way they inspire me through their endless creativity, dedication and passion for creative expression.

James Daugherty set the tone for style, fashion and individualism during a time when this was not considered “the norm” for an African-American man. He and his designs were the definition of elegance and grace but unfortunately, Daugherty was not embraced the way he should have been. This post is not a “trend of the month” (and I love trends) but rather a profile of passion, humility and talent. I am honored to tell the story of James Daugherty. 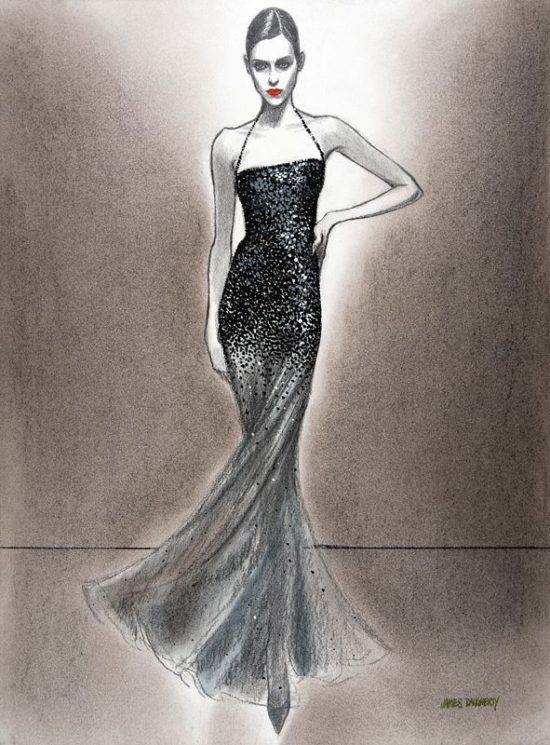 James Daugherty was an African-American man who had a burning desire to express himself through his designs (that to this day many people have not even seen). You will see a handful of them now. His natural talent in his sketches is breathtaking. When I saw the sketches myself, I was shocked at his sense of artistry. It was almost as if each sketch represents a character that comes to life with Daugherty’s sense of composition, embroidered details and never-ending creativity. If you notice, each individual sketch features a model with flawless makeup, a unique hairstyle and jewelry that all blends seamlessly with her apparel. I love that each always a signature — the red lipstick. Actually, the seamless thread is a trait of a true artist. His designs (even though created in the 70’s) are so chic and timeless that I could see the modern and style-savvy woman wearing his designs today! 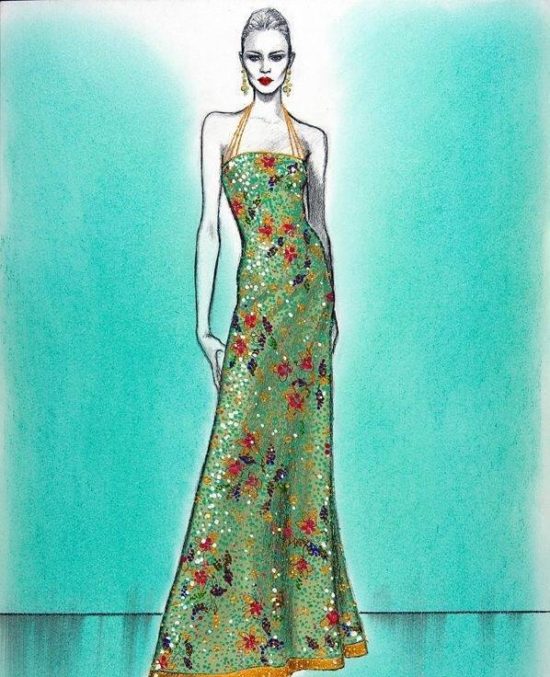 So who is James Daugherty? He was the classic underdog. Not in his innate talent to design, but in his background, skin color and unfortunately, the era he peaked in (the mid 70’s). Daugherty was born in Los Angeles, the son of James Sr. and Pollyanna Daugherty, who were, respectively, a maintenance man and a maid. They did not have much money, but the rich women Daughtery’s mother worked for handed down all of their designer clothes that they no longer wanted. With the assistance of her son, James Jr., Polly would take the garments and redesign them to suit her needs. According to Daugherty, “By the time she would finish with these she would look like she stepped out of a fashion magazine.” James noted, “Momma would get all dressed up and I would sketch her.” Even from an early age, Daugherty was fascinated by his mother’s off-duty style, and he sketched her wearing the pieces — crepe dresses, veiled hats, and fox-fur chubbies that she had been given. When she left for work, James was off sketching an entire wardrobe for her. His mother had incredible style but his father had the technical artistic ability which James felt he inherited. The combination of these two characteristics attributed to James’ interest in women’s fashion. His mother’s unconditional support planted the seed and his talent just blossomed. She constantly told him that he belonged in New York. 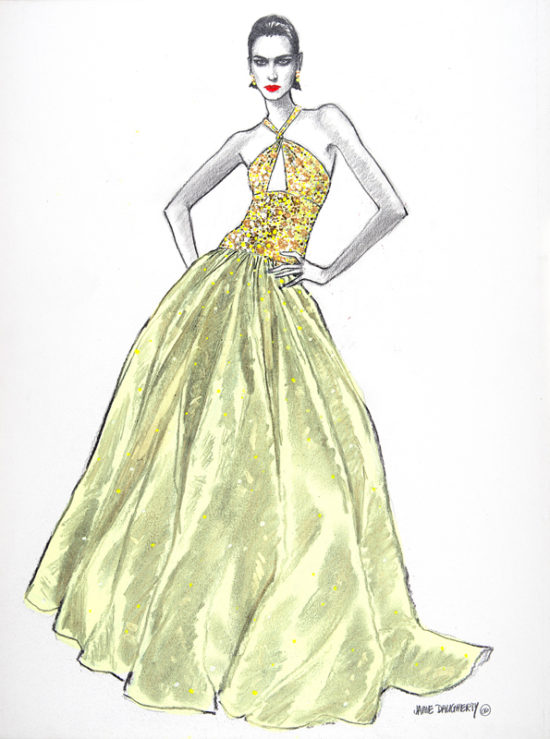 Over the course of this project, I had the amazing opportunity to meet Denise Orso, Daugherty’s daughter. She is lovely and stylish, but even more importantly, she loved her dad. Orso said. “My grandmother altered the clothes she was given and was always very stylish.” Denise emphasized that between her grandmother’s interest in fashion and her grandfather’s inherent artistic talent is where James probably got his inspiration to work in fashion design. She is proud of his work, and takes great pride in it, but Denise also loves her dad for being a wonderful father to her. I think that was the most striking characteristic about Daugherty after speaking with her. Even though James and Jaqueline divorced, he was still an exceptional dad. Denise explained that he never missed one holiday, one Birthday or a special occasion. Denise also described her father as “a kind, soft-spoken man who loved people and enjoyed life.” 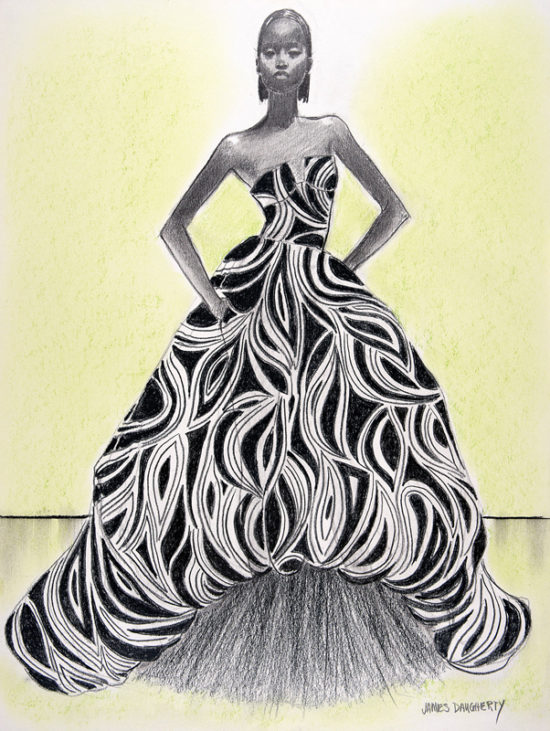 James later attended the Chouinard Art Institute, which much later became Cal Arts. He completed his three-year course but at the time, the only job available was that of a maintenance man at Paramount and MGM. Apparently, the employees of where he worked even noticed a special touch. This eventually led to him leaving sketches of his work in the offices of the costume designers he cleaned for. The famed Edith Head of Paramount Pictures gave him his first job as a sketch artist on the films The Ten Commandments, The King and I and Funny Girl. He also worked on many of the costumes for “I Love Lucy”. “We had to design things that framed the face,” he said, Daugherty added, “That is why I loved sketching faces. The face comes first.” 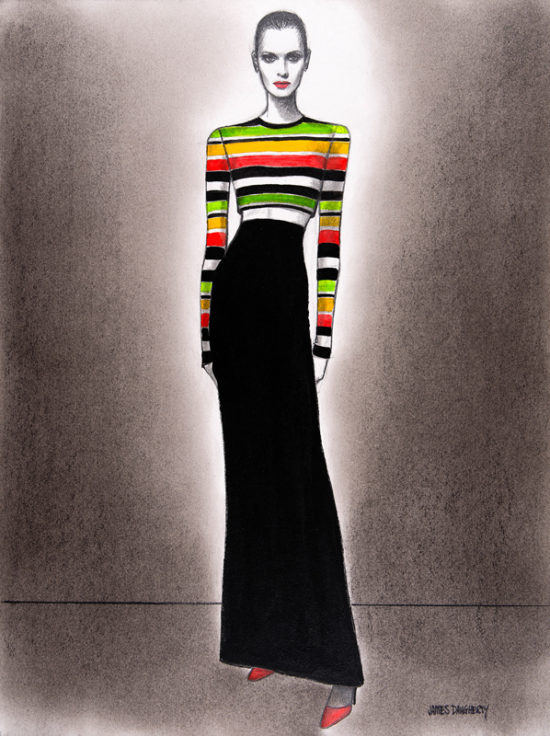 Being the ambitious man that he was, he then headed east. His goal was to do costume designing on Broadway but ended up finding work in manufacturing on Seventh Avenue. Instead of sketching for great costume designers, he worked in the fashion houses of Maurie Rentner, Pat Sandler of Highlight Fashions, Bill Blass, Anne Klein and Richard Cole. When he left Highlight Fashions, he was still determined not to let his skin color be an issue. He stayed with Jerry Silverman for seven years , but frustration grew since he still had to obtain final approval on his designs. Jerry Silverman hired Daugherty with ground rules: There would be no identity in the showroom and certainly no credit on the labels. James then started to really worry about his future. 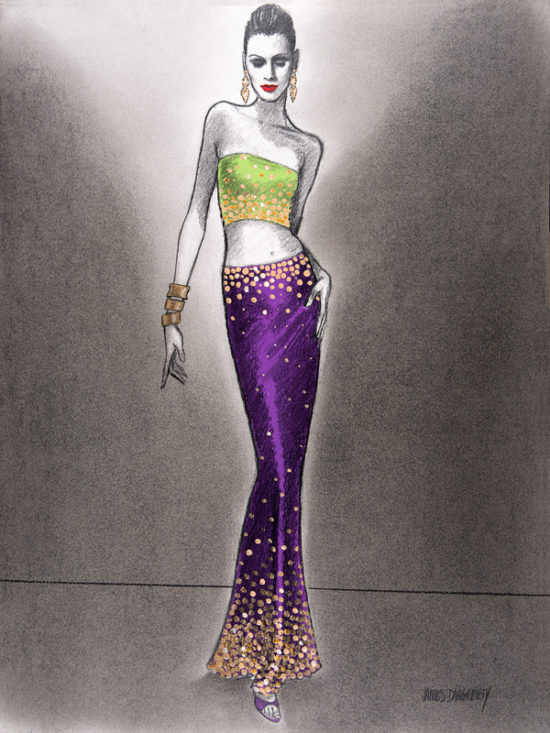 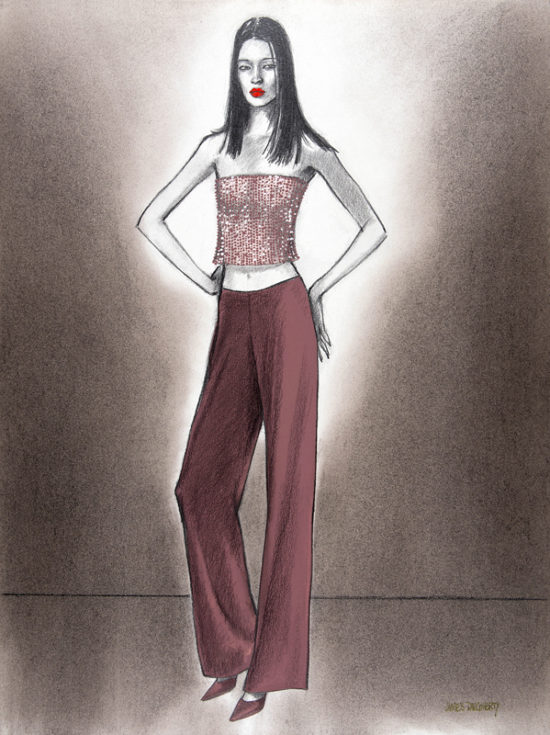 After taking a position to make ends meet in Women’s Contemporary clothing, again, he was grateful to be working in the fashion industry; yet, his name was not allowed on the label because of his skin color. This might be hard to believe but it is reality. When I saw the pictures of the Contemporary Women’s Line, they were wonderful and featured wrap dress, silk skirts and classy pant suits. After watching an early interview with him on his contemporary line I got a hint into his thinking, his method. He wanted women to look like women. James believed in women tapping into their femininity and wanted them to be proud of their figures. His day wear and evening dresses were usually synched at the waist, he liked pockets and there was always a comfortable flow and natural fit to the garment . James also liked silk a lot. He loved color and didn’t want women to be afraid of it. If he designed pants (and if women had to resort to them), they were lightweight as well. I loved how he stated, “It is just as important how a woman enters a room as when she leaves the room.” Another words, one must know how to make a statement with her choice of style. 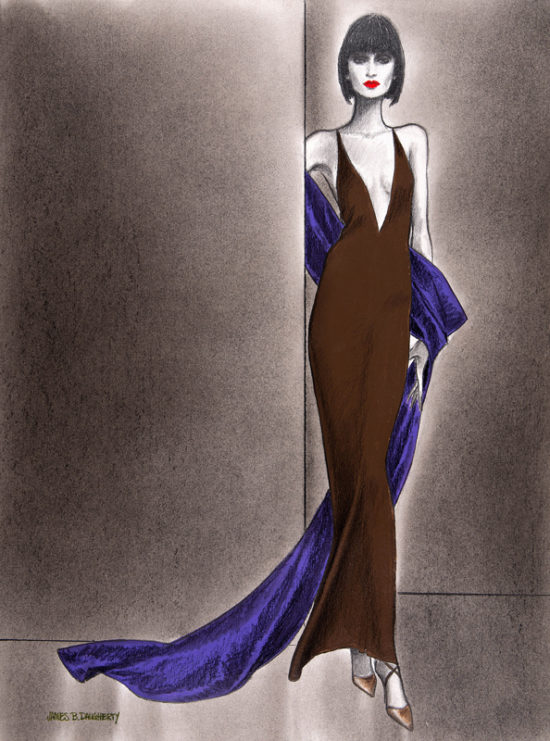 One element that I find fascinating is that his designs are incredibly elegant with a modern edge. Look at the structured fit, the colors and composition. These are gowns that I envision many of today’s stylish actresses, musical artists and models wearing. I can easily see Lupita Nyong wearing the first, Angelina Jolie gracing the second, Charlize Theron in the third, Marion Coutillard would be wonderful for the fourth, Nia Long in the fifth and Uma Thurman stopping traffic in the sixth and Cate Blanchett in the last. It would be stunning. I love how the clothes he designed fit the models. They hug the body proportionately. James understood that women do not want a complicated fit. They want to feel feminine but not in an arduous way. There is a very modern and beautiful aesthetic to the Daugherty look.

Orso told me how he enjoyed working for women’s contemporary lines but his real dream (obviously) was to have his own label versus having other designers stick their names on his. Yet, within this dynamic, Daugherty was known to be very gentle and mild-mannered and never seemed to “push back.” With his amazing talent I do not understand how he could not have fought back. Yet I am from the south, and I know the limitations (even today). Was this part of the reason why I was attracted to this story? Maybe. When I watched his television interview, I saw the gentle soul behind the designer. Times were different then and he was grateful to be working in the fashion industry, even though society was missing out on a fashion icon. After studying his sketches and the emotions that they evoke, I feel that was his heart and passion were within the evening gowns featured here. They are personal. Not to mention, there are tons of them. I can almost envision James in his New York apartment sketching away at night and dreaming of his name being on the label. 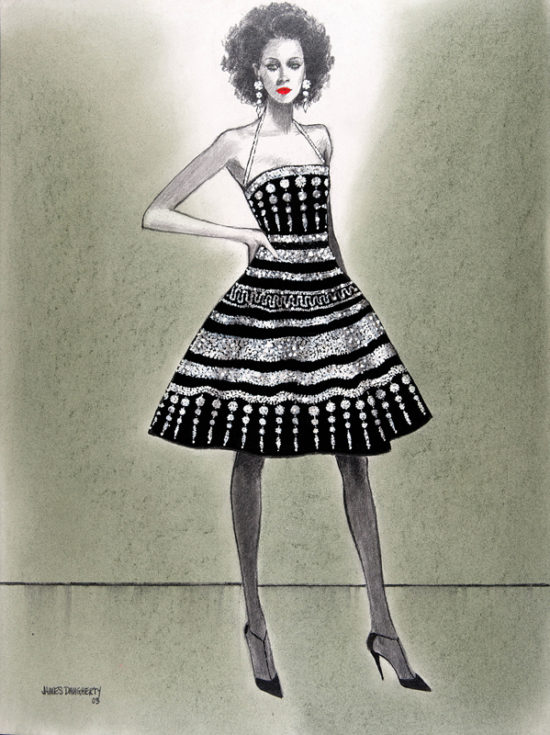 Finally, after working for years to reach this point, Daugherty was able to open his own store on 7th Avenue in NYC. Ben Shaw, an entrepreneur who backs designers, gave him a call and it was a go! James opened up his fashion house at 550 Seventh Avenue in September of 1974. He knew times would most likely change in terms of being well received by the public as a black fashion designer; yet, James considered himself the “Jackie Robinson of Seventh Avenue.” His first collection was well received by the buyers and press…and that is what counts in the fashion business. It was still hard though and his business eventually did not survive. In 1976, James Daugherty was named Designer of the Year by the Fashion Sales Guild. From 2003 until his death, James Daugherty was an adjunct professor in the Fashion Design Art Department at the Fashion Institute of Technology, where he genuinely enjoyed teaching Beginning Fashion Design to teens. I am sure it was a fantastic class and would have loved to have taken it.  This is one story I am sad to leave. I sort of fell in love with this beautiful man and his journey. At least I got to tell part of it. I will probably never look at fashion the same way again, and for that James Daugherty, I thank you. I thank you for giving us beautiful designs, grace, elegance and paving the way for other African American fashion designers. 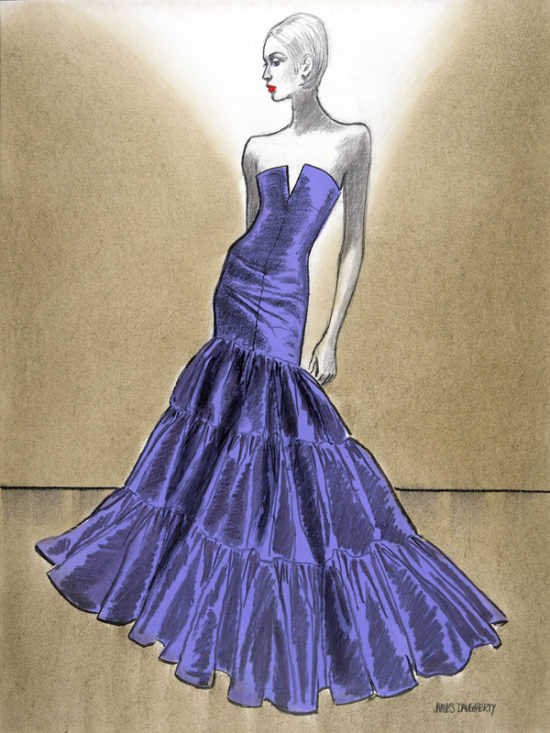 Lastly, it is hard to believe the sketches featured here are only a small portion of his fantastic creations. Apparently there are 740 in total. Whoever gets first shot at an exhibition of his stunning sketches will be very lucky and in for a magical surprise.

Is The Dyson Hair Dryer Worth The Sky High Price Tag?