A female manga spirit, split in two. The samurai transferred into the Tarantino-like Black Mamba brings out her determination and strength and encounters/clashes with the geisha’s hyper-feminine side captured in Arthur Golden’s memoirs in which being a women becomes an art to nurture and cultivate with details and sensuality.

A veritable oriental ride through diametrically opposing references in a toing-and-froing of styles, which leaves traces from one garment to another while keeping to a single theme, contrasts.

The focal point of this infinite elegance is the obi: an important detail that creates shoulders made fluid by silk bows; it becomes a belt and embeds itself in necklines that embrace the body; it is often transferred into quilted embroidery to become a net, a rigorous cage that disappears in contact with sheerness and hyper-feminine colours.

A delicate, unrelenting mal d’Orient seen in striking techniques: here is plissé, a memory of sweetness and mystery where colour tones shade off into materialising graphics that disappear and are transformed. A detail with a high femininity quotient that enchants and seduces when matched with the midi dresses’ obis.

New Zen style codes from the Land of the Rising Sun; the attention shifts to volumes. Big is better for outerwear; bomber jackets brush the knee or are short and ultra-large; military-inspired cropped jackets display obi-like macramé embroidery; jackets are large, long and with big, circular sleeves.

Volumetric fluidity from the waist down on flowing, floaty sunray pleated dresses in a kaleidoscope of colours with the rigorous touch of knots that balance softness with strength – on belts, sleeves, neckline.

Hanami couture informs prints with rough, casual lipstick brushstrokes – micro, macro, asymmetric, micro-geometric – compared to the plain colours of hyper-clean styles with straight trousers featuring vinyl inserts on the hips, or wide, short pants with a sports vibe. Some have maxi pockets with a military look, a kind of divertissement.

The palette is brilliant, focusing on two shades: greens, ranging from military to lime, and reddish-purple and fuchsia, with forays into natural sub-tones which are often fused with black and with white. 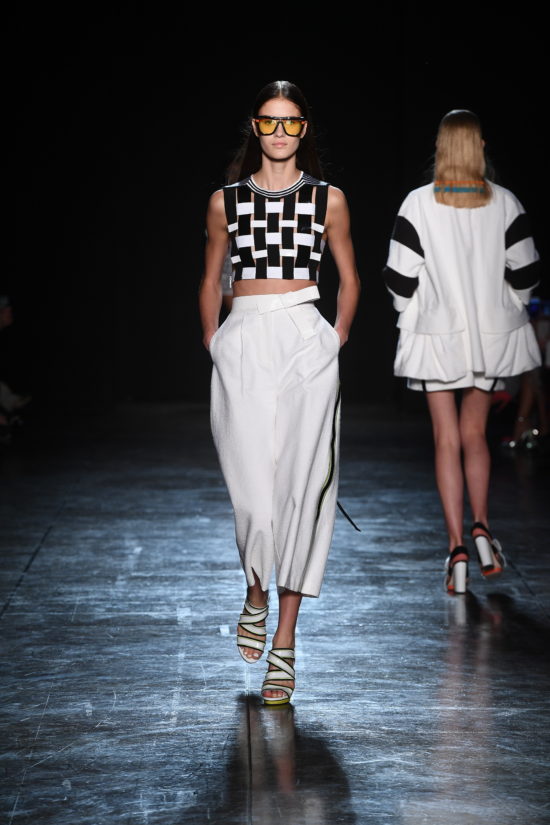 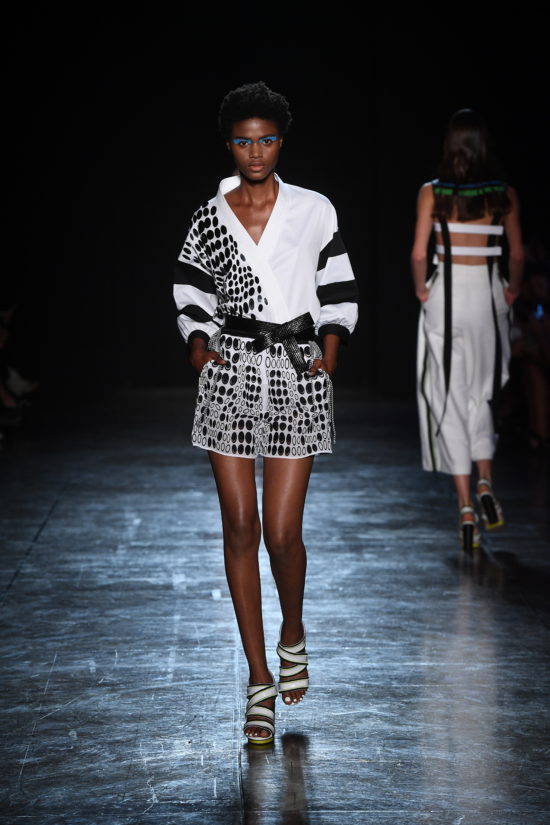 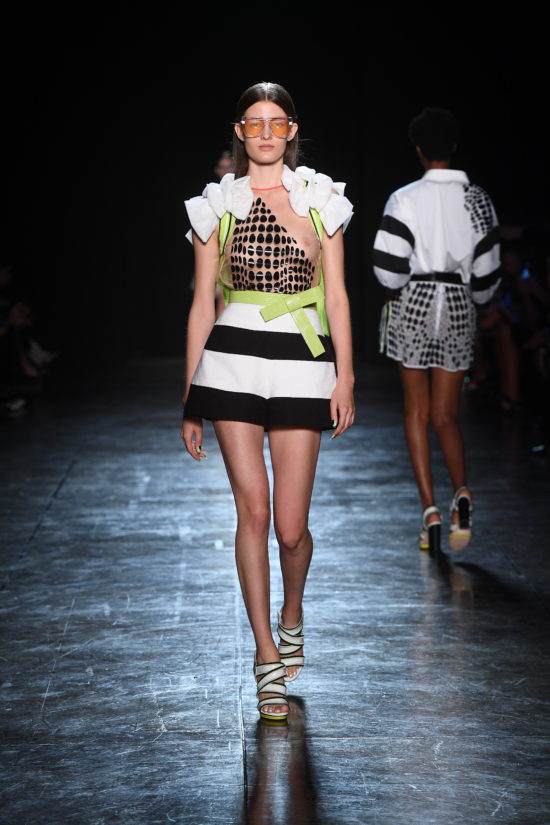 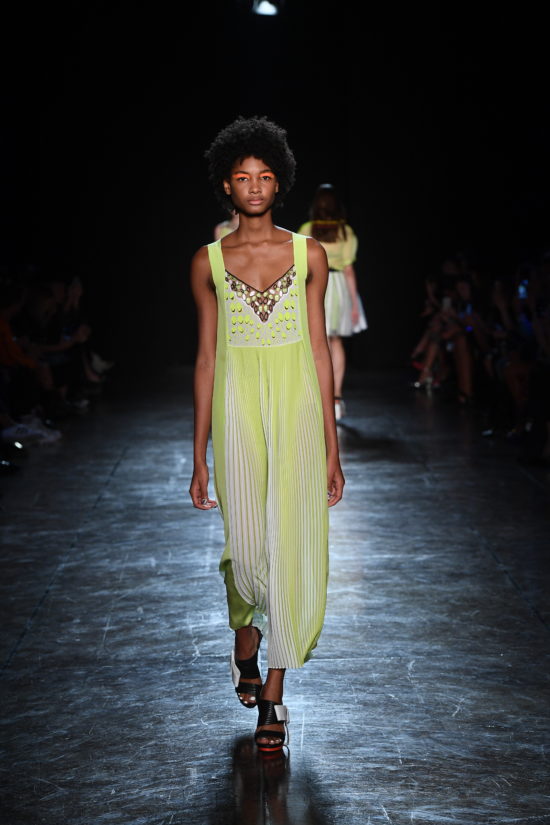 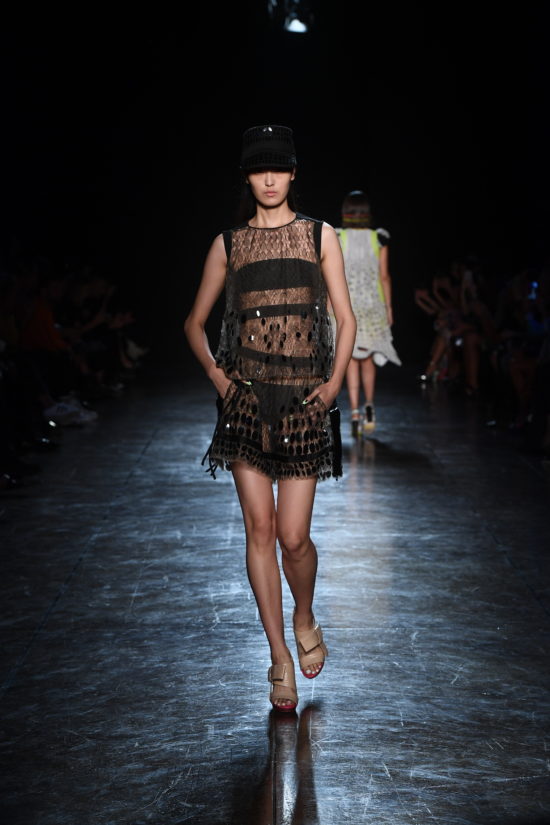 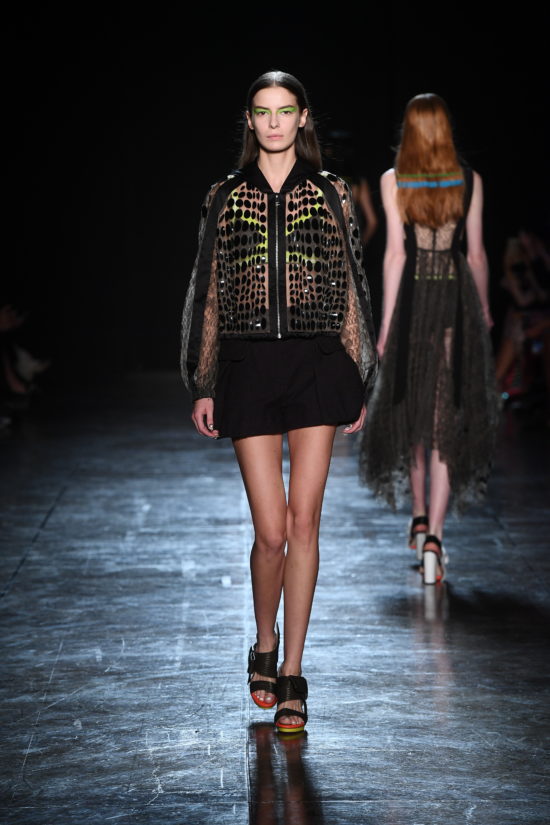 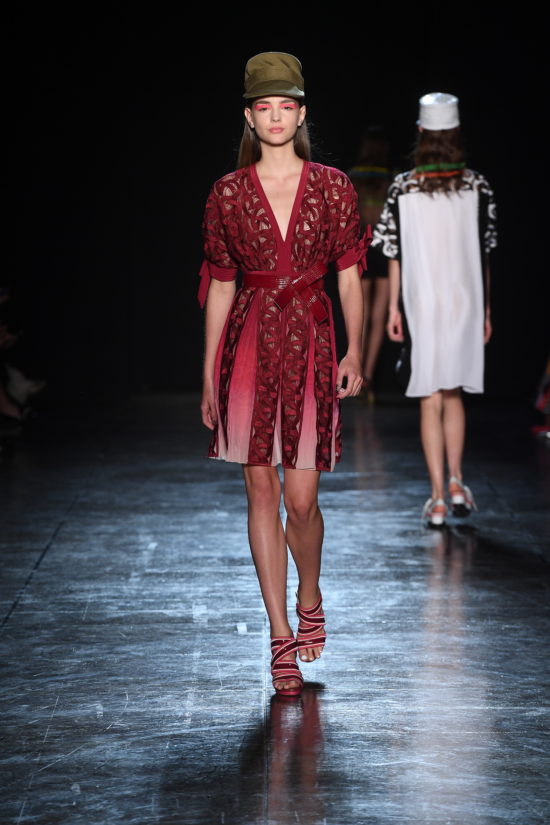 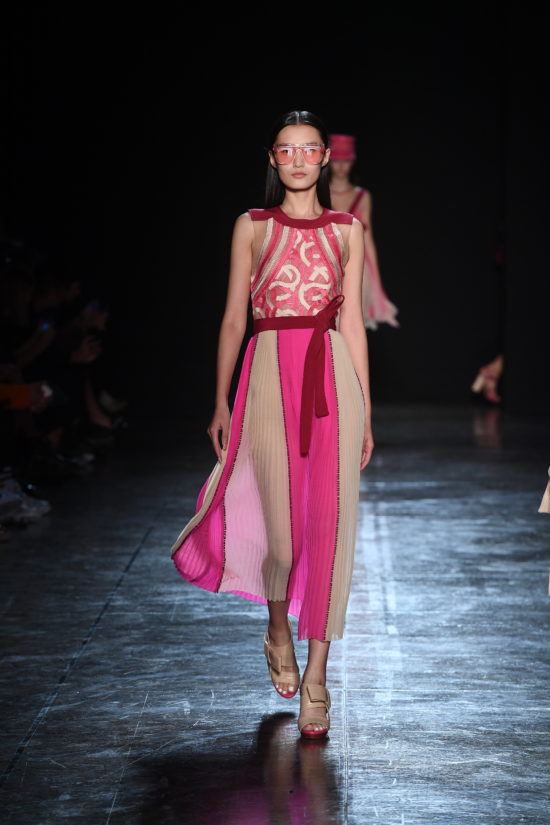 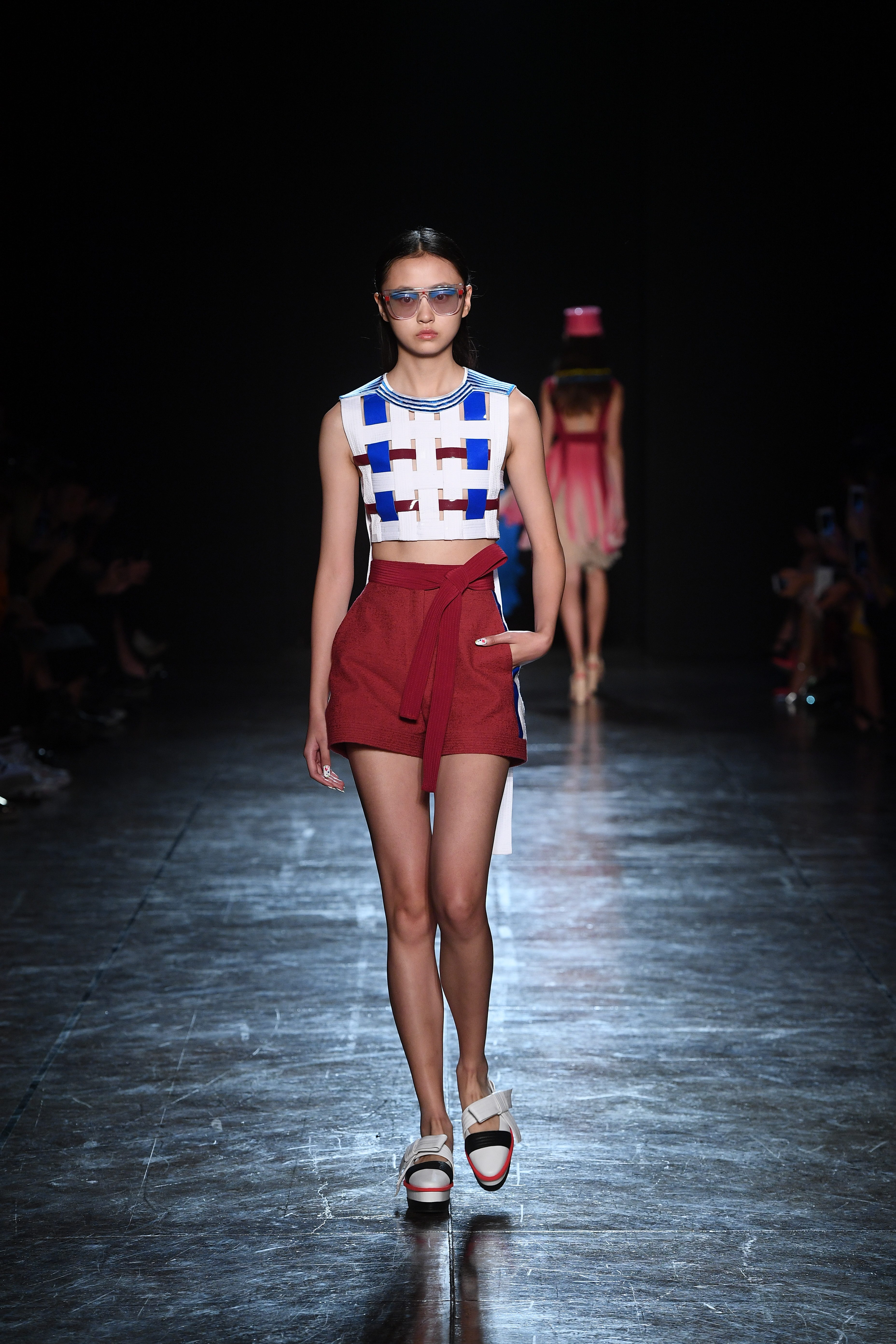 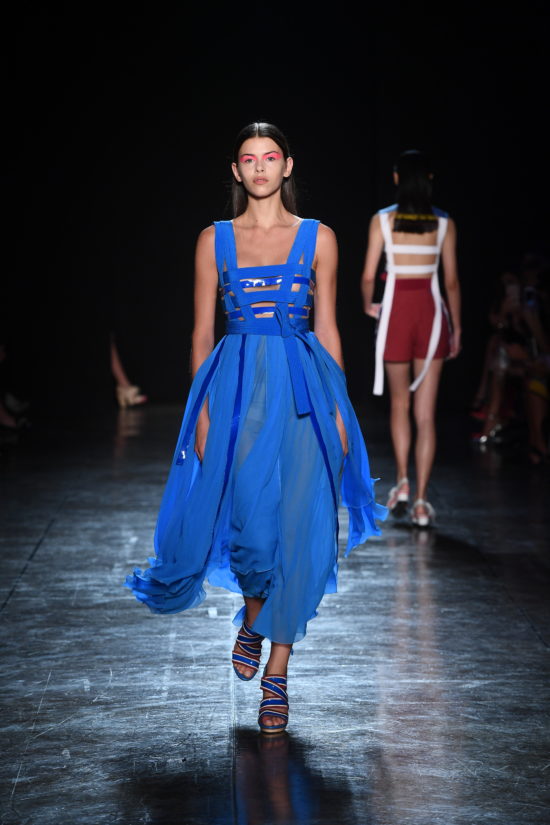 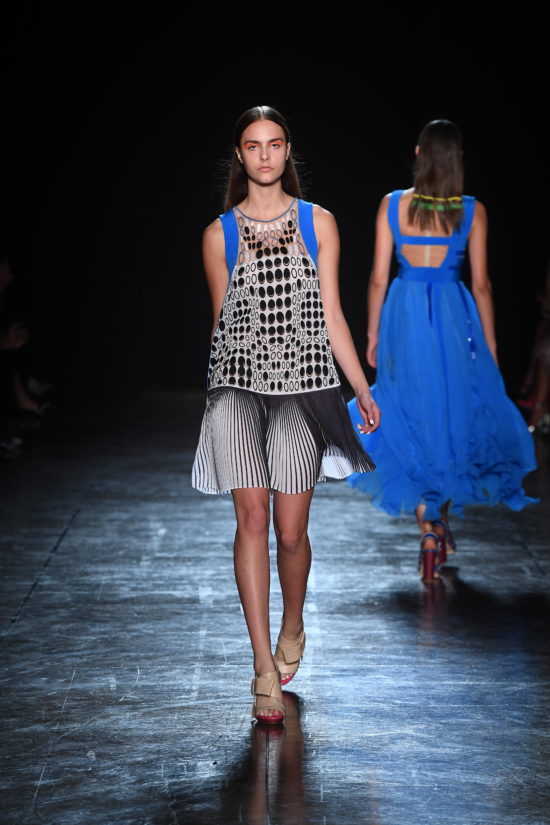 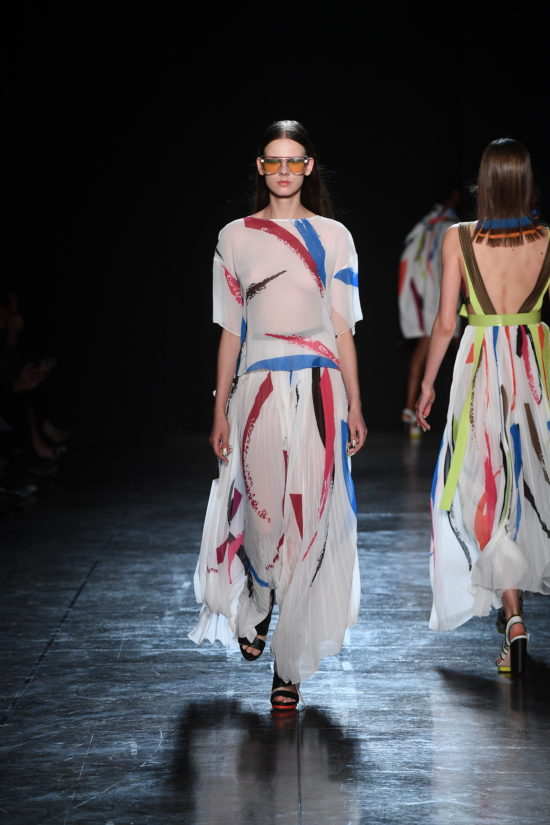