During the 6-day festival with over more than 50 artists, such as fashion designers and new talents from cinema industry, each and every one will get the opportunity to show their work to international press, buyers and important people from cinema industry.

BFW will be held in Sofia, Bulgaria, from 5h until 9th June 2017 and ASVOFF9 from 9th until 11th June at Nu Boyana, the biggest film studios in Eastern Europe.

The program contains fashion shows, static presentations, workshops for emerging talents and a pop-up fashion showroom and store. The 2nd edition will be composed and curated around the theme ‘Fashion Meets Cinema’, reason why fashion icon Diane Pernet chose Balkan Fashion Week for the International Launch of A Shaded View On Fashion Film Festival 9th Edition. 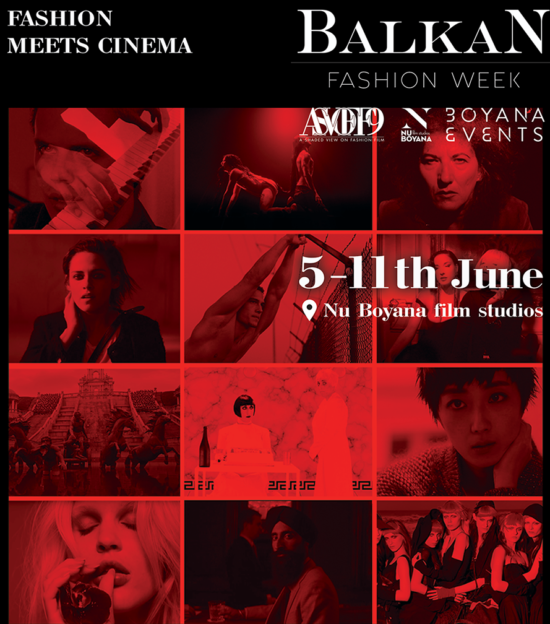 The campaign for this edition was developed in cooperation with emerging and established bulgarian designers like PROVOCATIVE by Gloria Dimitrova, Lilian Edwards, PLIK Luxury Leather Goods, M2V Design, Stoyan Radichev, BANDEROL, Bloom Stars, Friction Code and Flicka Jewelry. The stunning identity FW17/18 campaign ‘’Fashion Meets Cinema’’ for Balkan Fashion Week was shot by Douglas Bassett at Nu Boyana Film Studios in Sofia, the biggest film studios in Eastern Europe. The idea of the campaign is about women with personality from movies like ‘’Pulp Fiction’’, ‘’Sin City’’ and ‘’Elizabeth, the Golden Age’’, so each model played roles like Mia (acted by Uma Thurman in Pulp Fiction), Gail (acted by Rosario Dawson in Sin City) and Elizabeth (acted by Cate Blanchett in Elizabeth, the Golden Age).

Hair and makeup were done by Valeria Orlando, famous Beauty Director from Milan, Italy, also known by her work with important established brands like Fendi, Versace, Alberta Ferretti and many more.

More information about the participants and program are on www.balkanfashionweek.eu and www.ashadedviewonfashionfilm.com .