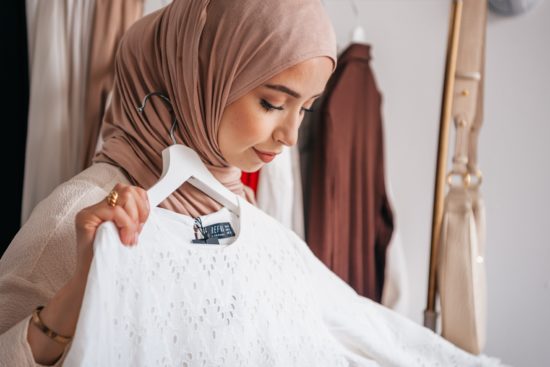 The origins of modest dressing can be traced as far back as the early 8th Century Islamic Empire, later seen during the 14th Century Ottoman Empire, when shawls, robes and kaftans were commonly seen. In England, Medieval modest dress (where head-coverings were also worn) was eventually replaced by the sweeping skirts of the Elizabethan era.

As empires have risen and fallen, so too have hemlines: specifically in the West, where “the hemline index” of The Great Depression was thought to reflect current stock prices, a theory which has since been debunked, owing to post-war eras, where longer skirts were seen as a sign of wealth.

While the world of fashion constantly changes, for many (especially people of the Jewish, Muslim and Christian faiths), modest clothing is much more than a trend: it is a cultural l and religious practice woven into the fabric of their lives.

In this context, modest dressing often symbolizes respect, redirecting attention away from the physical realm (including the body) to the spiritual. To this day, companies like Dainty Jewells are redefining traditional shapes, styles and textures for the faith-based modest dresser.

When she appeared on the cover of British Vogue in 2021 dressed in a lingerie-inspired outfit, Eilish was alternately met with applause and criticism, with some accusing her of “selling out”. Eilish’s case was a typical example of a lose-lose situation, where criticism of a woman’s liable to take place, regardless of whether the outfit is loose and covered, or tight and revealing.

The policing of women’s bodies and what they wear is (unfortunately) a recurrent historical theme that continues to this day. Certain design elements of women’s fashion such as high heels, underwired bras and corsets are restrictive by nature, making it difficult for the wearer to move, or even breathe.

Arguably, the most constricting element of women’s clothing is pressure to conform. Historically, the origins of modest dressing are thought to be patriarchal: in Ancient Greece, as more women were told to remain at home with their fathers and husband, their clothing became more covered.

For some critics, the concept of modest clothing is considered oppressive, yet this is frequently in reference to places where dress is enforced, rather than chosen, and in some cases, breaking the rules is seen as a punishable offense.

The Right to Choose

Clothing has always had cultural significance, symbolizing status, respect or religious piety. Similarly, modest clothing is a topic with many layers. For some, it has spiritual meaning, and for others, it may simply be a comfortable alternative to more constrictive pieces: recent years have seen a shift away from “body con” clothing towards comfortable, functional styles.

Whether our choice of clothing reflects  faith, fashion or a fluctuating economy, the right to choose (rather than the clothing itself) is what transforms clothing from a symbol of oppression to something that symbolizes empowerment, creativity and the freedom to express our beliefs and values through what we wear.