Last night the Screen Actors Guild Awards were presented, Brad Pitt won for Best Supporting Actor in ‘Once Upon a Time in Hollywood,’ and also told us he’s on Tinder (???!!?!?!?!), he and Jennifer Aniston had a very fun reunion,  Joaquin Phoenix won Best Actor for ‘Joker’ and thanked his favorite actor, Heath Ledger for inspiring him and so much more. But now let’s get to the fun stuff and the reason we’re all here: THE FASHION. Questionable dresses, strange suits, and some absolutely show-stopping glam looks, Fashion Correspondent James Kelenyi and your Senior Fashion Editor River Callaway have rounded up our top 20 Hits & Misses from this year’s carpet, check it out below! 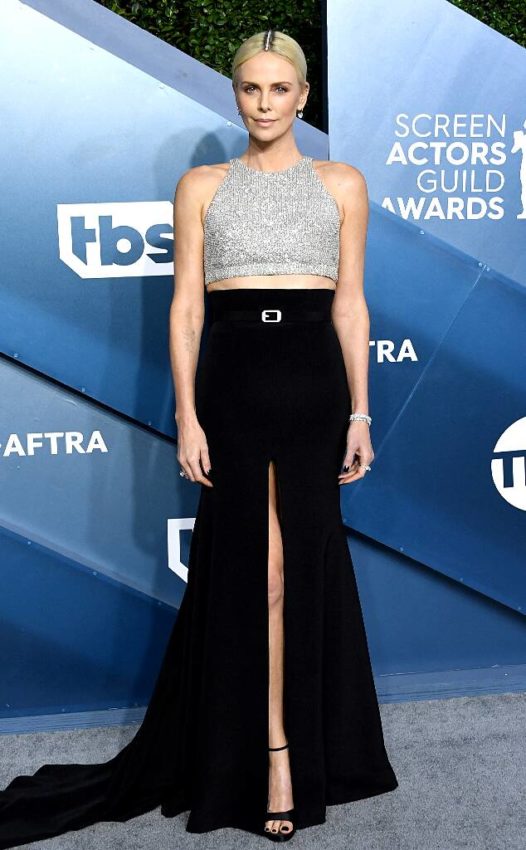 River: I absolutely love this look, and Charlize looks fabulous in it. From the sequin crop top to the belted high-slit dress, it’s a winner in my book!

James: Charlize looks gorgeous and this look is a bit out of the box for her. Also, check out the unexpected twist with the diamonds in her hair! She’s still bringing you Hollywood glitz and glamour but in a fresh and cool way! 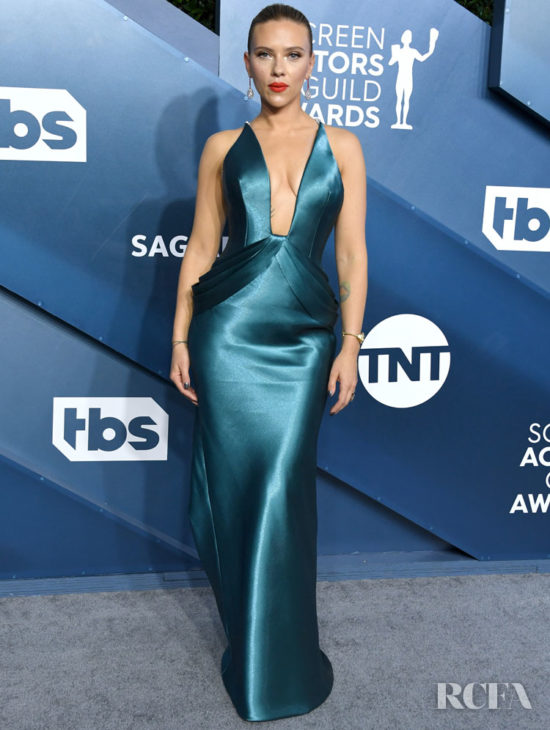 James: Another knock out of the park for ScarJo! She looks every bit the movie star that she is! Love this one!

River: It’s not one of the worst, but not one of the best either for ScarJo. Not sure what’s going on with her this season and odd chest-cut-out dresses? First the oddly-cut low V Vera Wang she wore to the Globes and now this? She always looks amazing, but I think another more conservative look would elevate her stunning features and her style. 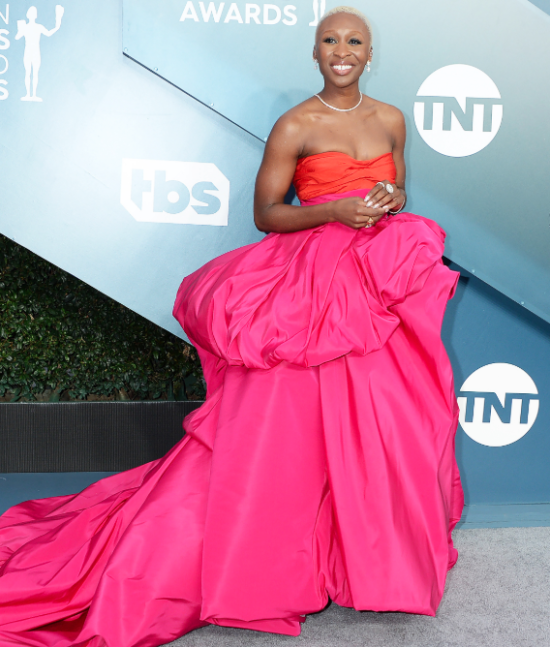 River: Bubbly and fun! While I’m always a bit wary of tufted taffeta, but I love the mix matched color on Cynthia and her stunning smile can pull this one off x 100!

James: Fun Fashion! This is the kind of red carpet experimentation I love to see. It’s whimsical yet sexy and the color brings major excitement! 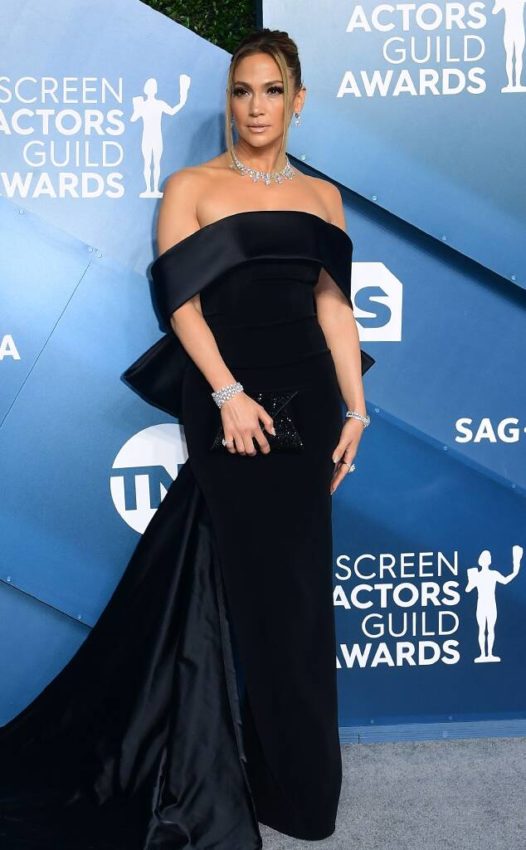 James: 9 MILLION DOLLARS worth of jewelry! I mean if you know you’re not gonna win, might as well show up in 9 MILLION DOLLARS worth of diamonds. All that being said, she’s totally taunting us with that bow on her backside still redeeming herself after that Golden Globes disaster. She looks simple, beautiful and like a total Hollywood movie star and major player in the game,

River: #TheMost I Die! JLo has really picked it up after her Golden Globes catastrophe and this strapless big-bowed suuuuuper chic gown has elevated her back to her status: Silver Screen Goddess, + the hairdo and jewels? Talk about inspo! 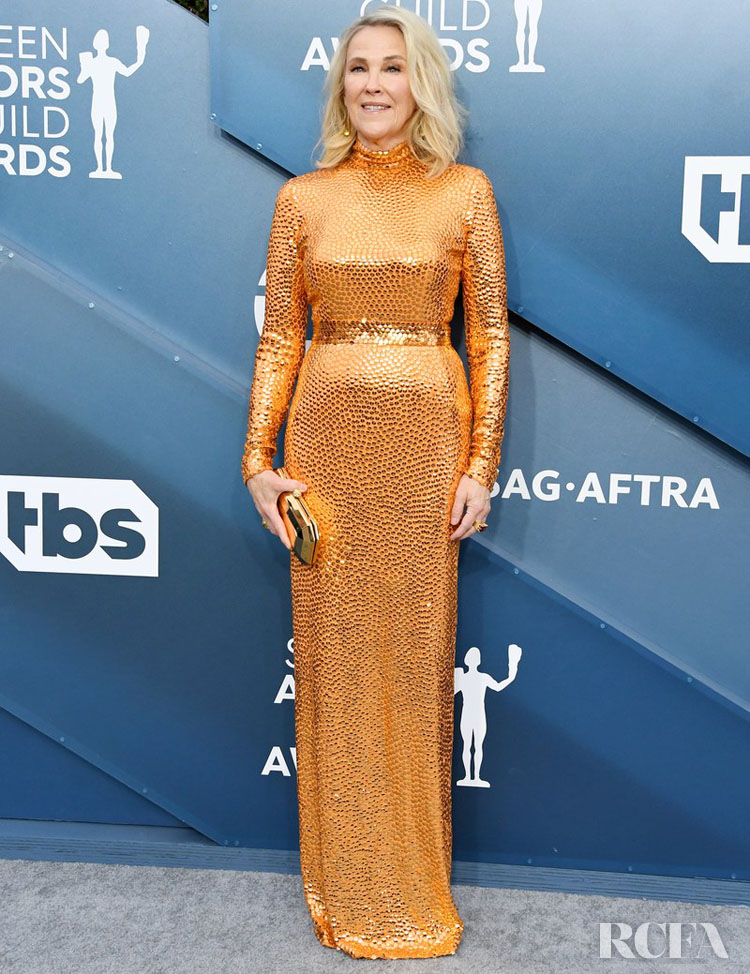 River: Channeling Moira Rose and I love it. The sheath dress looks great on her and the whole silhouette is very age-appropriate while also insanely chic. And orange? So fun!

James: Not a fan! The color is overpowering her skin tone. The dress is certainly wearing her instead of the other way around. It looks like a costume from someone’s Burning Man trunk. 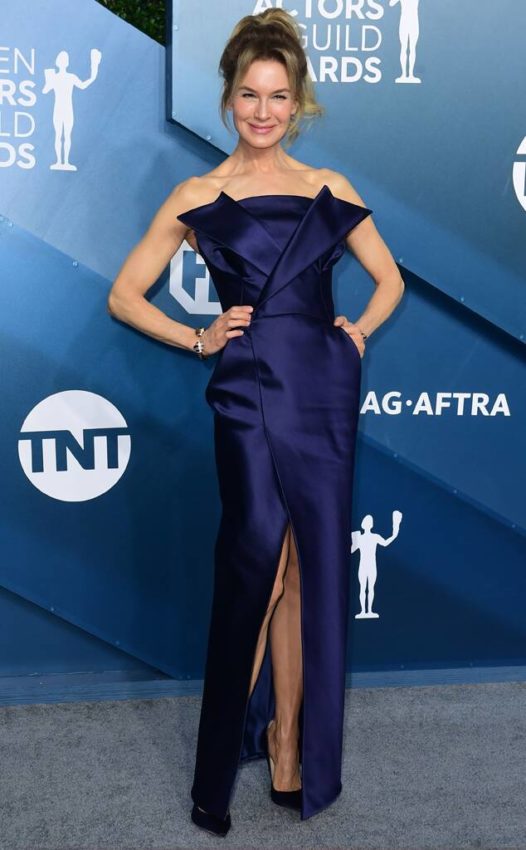 James: Now-I’ve been a fan of Reneé’s looks all Award Season long. She blends the perfect amount of sophistication, sexiness, and Hollywood glamour. However, I’m starting to feel like it’s a little one note, all the time. Also, she needs different hair here.

River: I can say that navy really looks great on her, Reneé can really wear a color wheel, but a tuxedo-esque gown? Not so much. 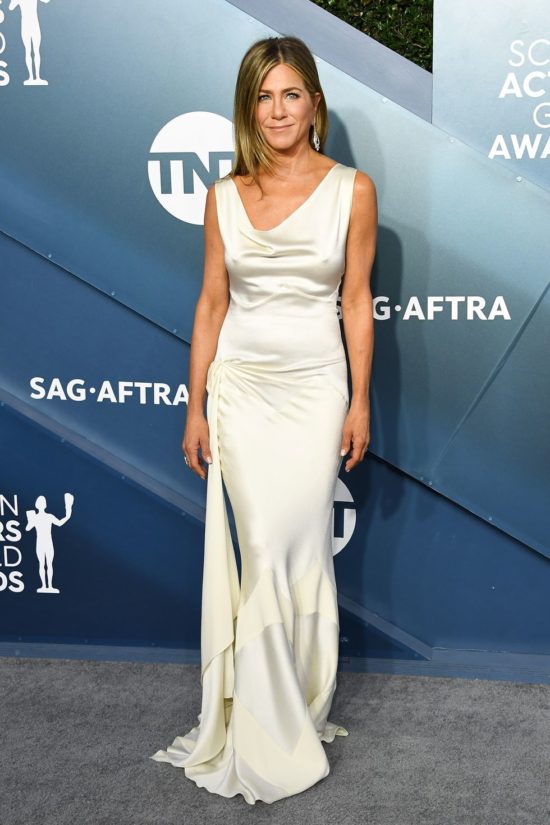 River: THE BEST OF THE WHOLE NIGHT. Need I say more?? Jennifer Anniston came to win tonight, and I don’t just mean Brad Pitt’s heart in this absolutely breathtaking cream silk gown. She in this dress stole the internet and the whole night, and we’re officially #teamJenn!

James: Nip -Alert!!! Other than that Jennifer looks sexy, glamorous and ethereal. Do you think she went a bit more provocative because she knew Brad was in the room?! 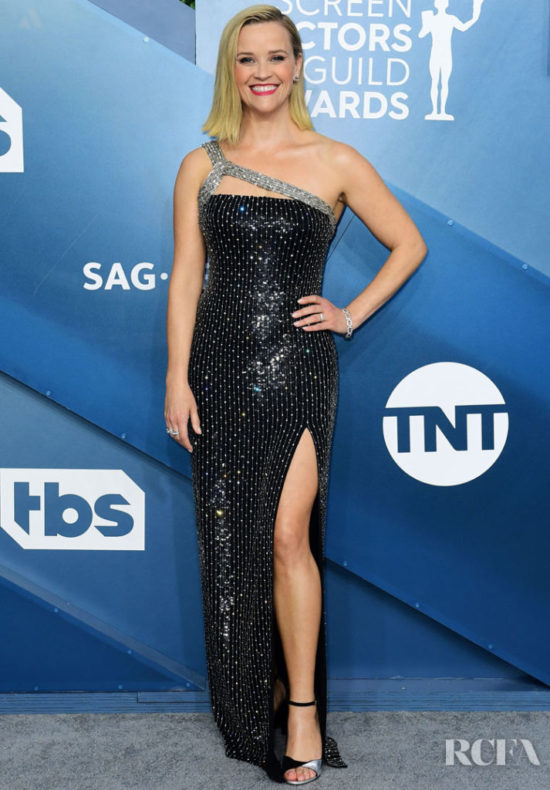 James: Reese looks amazing here-she’s super sexy and confident, but she has been rocking a lot of one-shoulder gowns like the structured white gown from the Golden Globes, so I’d love to see her in a new silhouette.

River: I love this for her. Reese usually goes for a color-pop on the carpet, but this black and silver Celiné gown is sooooo sooo stylish on her, especially when her makeup is understated glam with a demure red lip. Killin’ it! 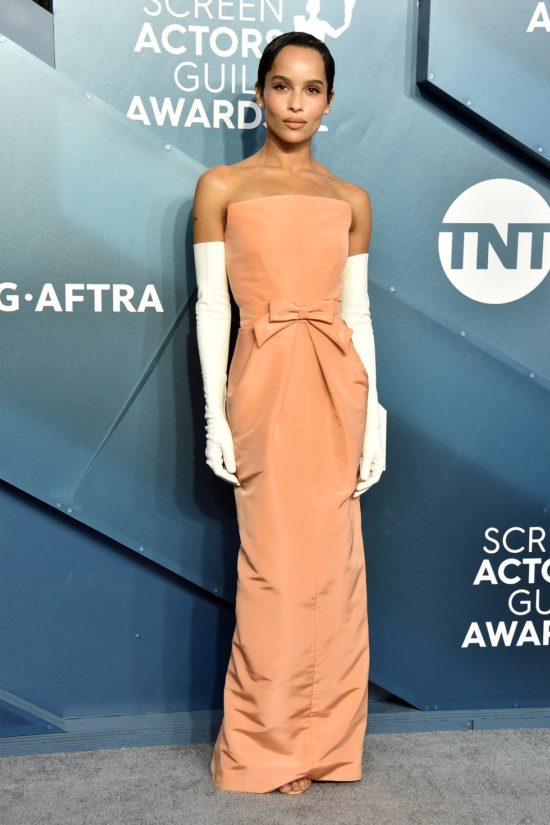 River: I really really love when people are able to do a nod to a bygone era of fashion, and represent it really well. Love the peach color and the high gloves added it adds such an elegant touch, and Zöe looks amazing in it! 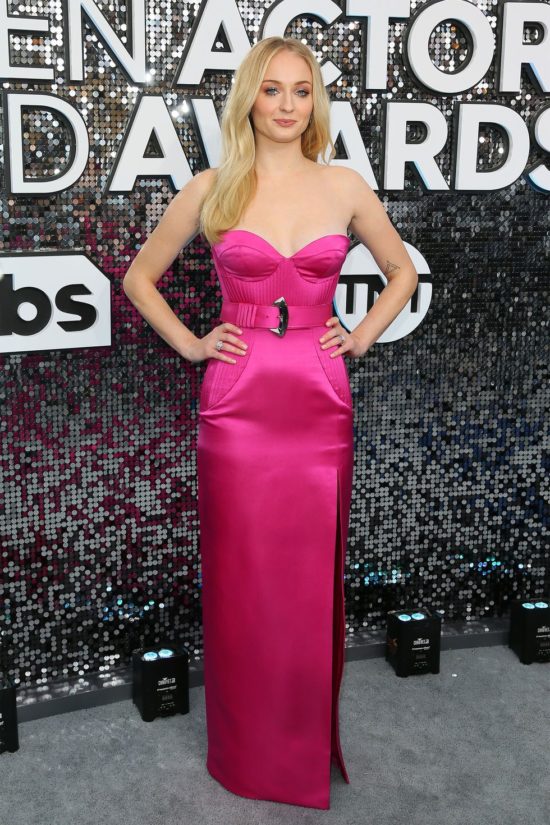 James: This. Is. Hot. Sophie is giving me Sharon Tate Valley of the Dolls meets Barbie meets sexy robots from Austin Powers. It’s cool and sexy and a big hit in my book.

River: I’m just not impressed with this Louis Vuitton look on Sophie. I do love the pop pink color and silhouette, but it’s very Barbie to me, and reminds me of Kacey Musgraves Moschino-Barbie look for the Met Gala… 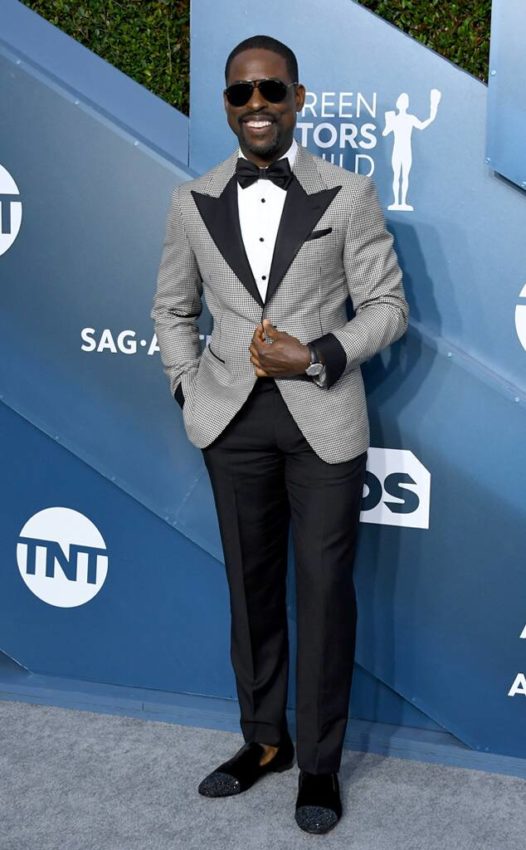 River: I love when men try something different on a carpet, and I really love that Sterling made plaid work in such a stylish way. He looks great!

James: Sterling looks great-it’s a fly ensemble and something different for men’s fashion on the carpet. But-loose the shades, this isn’t P. Diddy’s birthday party! 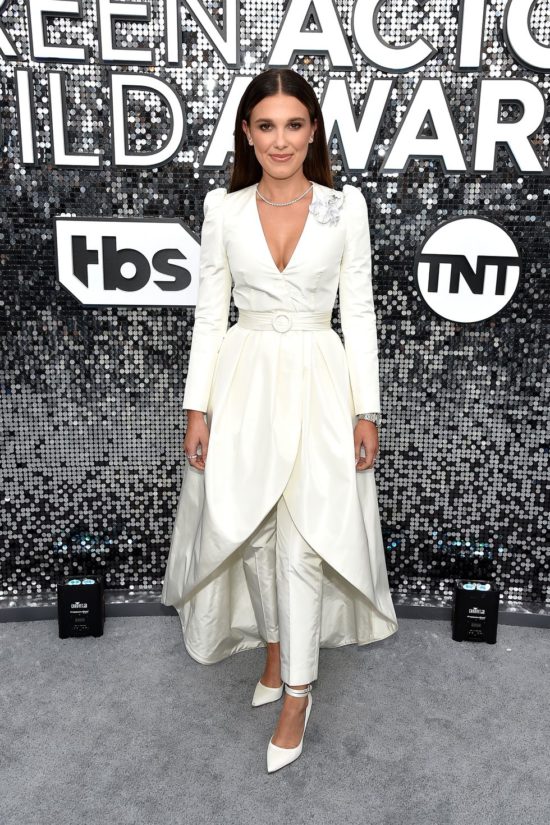 James: Millie is maturing so beautifully, it’s always a pleasure to see her on the carpet. However, this doesn’t do it for me. It looks like a cross between a modern wedding dress option and First Wives Club.

River: Sooooo elegant and chic I barely recognized Millie in this photo. I love the makeup, I love the all white, I am a little bit confused as to why a drape skirt and pants were needed, but I do like it, it’s something different! 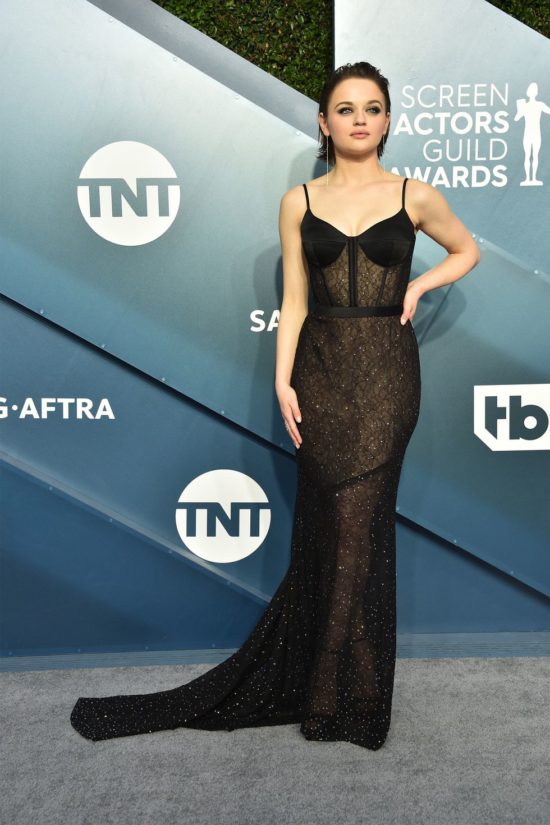 River: One of my favorite looks of the whole night, this definitely brings her back up to a fashion star after that huge Prada miss on the Critic’s Choice Awards. Sleek and beautiful, I love the mixed materials and the hairdo-fab Joey!

James: She looks great! I love the risk of dark eye makeup as well-she looks very very cool. It reminds me of Gwyneth Paltrow’s Gothic-attempt at the Oscars in 2002 when she wore McQueen, but Joey did it the right way! 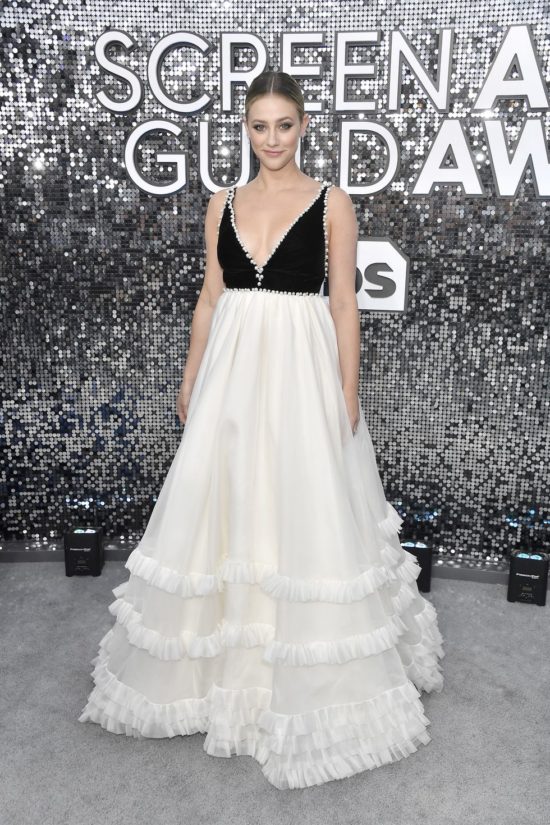 James: STUNNING. Let’s all give a round of applause to her stylist Elizabeth Stewart for picking this amazing Miu Miu number. She looks every bit young, elegant and glamorous-we’ll be sure to keep our eye on her!

River: Party on top and Gone With the Wind on the bottom, this Miu Miu gown on Lili isn’t a total miss, black and white gown can somehow work wonders, but it just really doesn’t do it for me. Go for something more form-fitting next time! 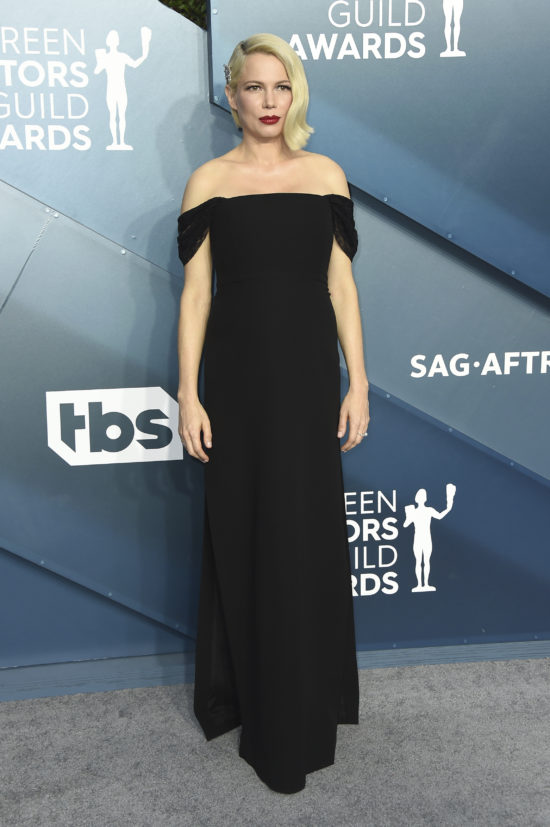 River: Ahhhhhh love this for Michelle. It’s simple, elegant and understated in the best way-she does pregnancy style in spades! Very Grace Kelly, especially with that haircut and red lip!

James: This just doesn’t do anything for anyone-including her. No shape, no excitement, kind of drab. But, it is clean and simple, just too SAFE for me. 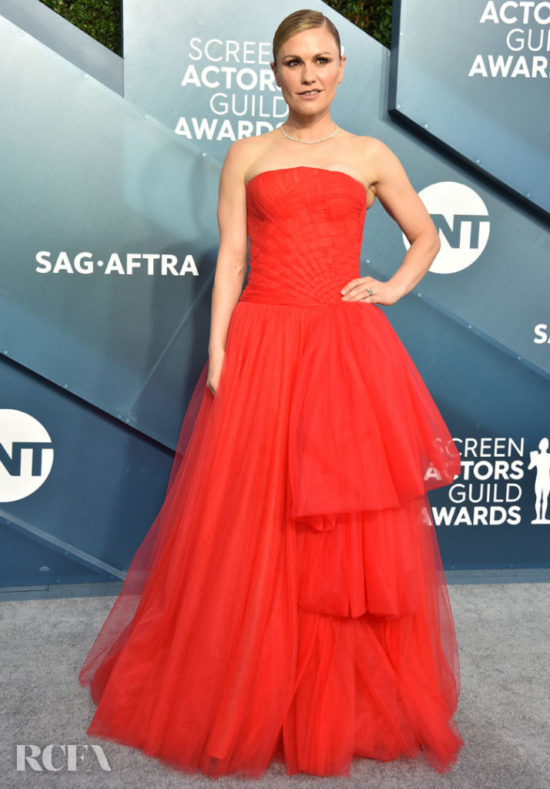 James: Anna looks beautiful here and reminds me of Scarlett Johansson at the Globes this year. Chic and so fun!

River: I think this Carolina Herrera gown is so fun on her-as well as elegant and show-stopping-red may be her color! 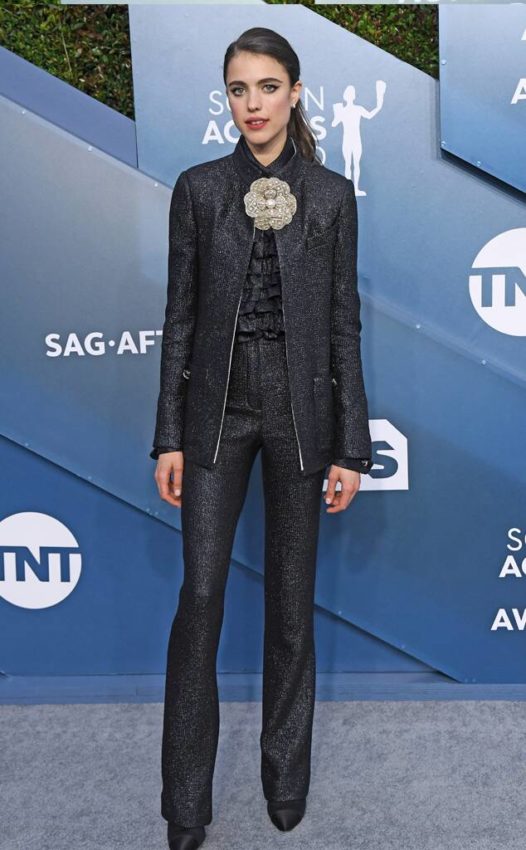 James: I loooove this. It’s new! It’s not another gown and it still looks glamorous and appropriate for the event. This look is fresh, young, cool and Parisian chic! 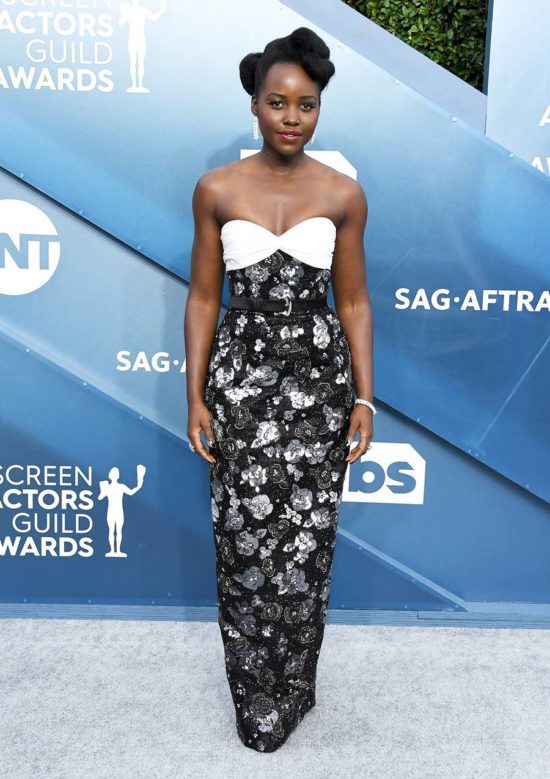 James: She looks absolutely beautiful, a big step up after that odd leather Michael Kors gown at the Globes!

River: Simple and elegant with a little twist, I always love a sheath gown-it’s so slimming and looks so beautiful on Lupita. Get it girl! 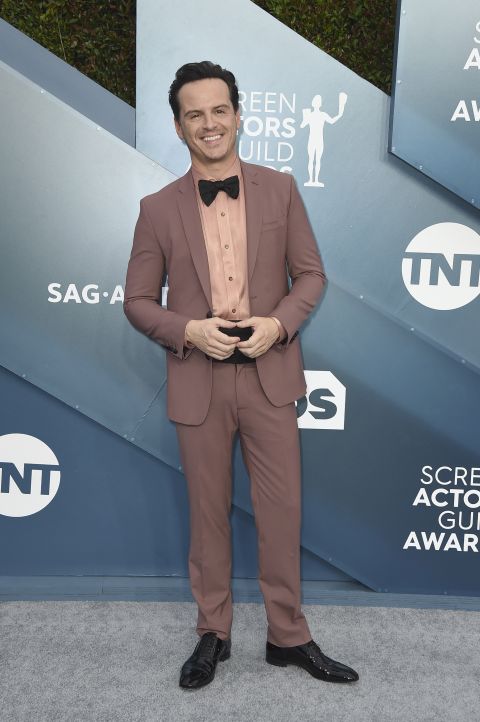 River: One of the absolute worst looks of the night, and possibly all of Awards Season…Andrew did you get your inspo from Dumb & Dumber for this one?!? Literally so confused after his amazing risk at the Golden Globes that paid off…Blink twice if you need help.

James: I like this…I love a mauve color moment, but loose the cumberbund and close the jacket Hot Priest! 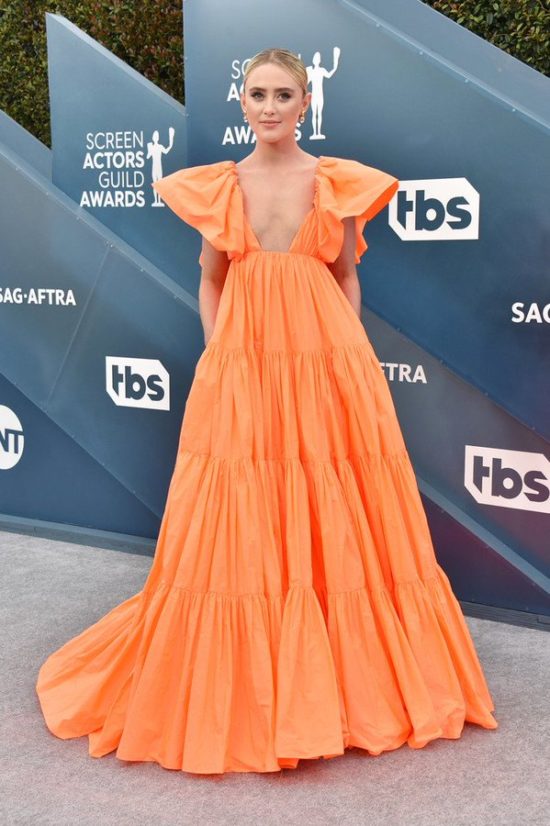 James: I like this gown…It’s Valentino, it’s beautiful and the color is fresh and exciting. However, I just don’t think it’s right for this award show, in fact I don’t know what award show this would be good for…

River: I appreciate that Kathryn took a risk here and also went for a bold color, but -as James said-it’s just not right for an Awards show!