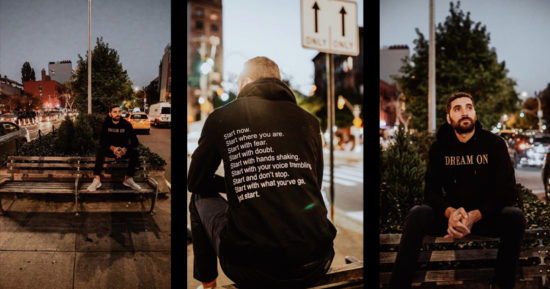 SHOT BY @BABIN for @WILWOOD_

You may have heard the name Giampaolo Ienna in whispers throughout NY. You see, this is a common name heard throughout the celebrity’s scene, more often referred to as the “celebrity whisperer.” However, this isn’t far from the truth.

We at THE LA FASHION had the opportunity to sit with the Italian native and hear his amazing story on how vision and true hustle has created the man you see in the streets of Manhattan today.

Ienna began working in Italy as an underground dj at the age of 14, before he decided to make a brave move to the Big Apple in 2009. However, the transition to the US for Ienna was not easy having left Italy with only $300 cash to his name. It was rough, admitting he “had to meet people in order to find a place to stay as [he] wasn’t making money.” We heard the words, but It’s crazy to hear that the man before us, well groomed and surrounded by top A-listers even spent hours struggling, more over 3 full days sleeping on a bench that he recalled being “on 6th Ave and Houston.” But his luck turned when he found an opportunity to DJ in the city, thanks to an underground promoter who heard his music and offered the opportunity to introduce him to the right people. Of course, as with most big breaks, the gig was non-paid, but the networking was priceless. Soon enough, Ienna was playing at the nightclubs while also picking up dishwashing jobs for a side hustle. “It was going great!” Ienna exclaims, “to the point that a dream to play at CIELO for Benny Soto became a reality.”

“I worked for Italian restaurants in the city from 2009 till 2013, and worked my way up from dishwasher to bus-boy to server to captain, and eventually from 2013 till today I mastered the hospitality art as VIP Director for places like Cipriani, Billionaire Club and Hunt & Fish Club” notes Ienna. VIP Director you may ask? Well, the role was not something readily available, as instead it was something Ienna created.

While mastering his ongoing VIP hospitality role, Ienna was hungry for more and jumped on a venture with Eytan Sugarman as co partners of WHITE HORSE TARVERN, the second oldest bar in NYC – a great resume booster, and one that only made perfect sense for the duo to collaborate on.

Along with this business venture, Ienna continued to push his hustle and had also begun working as a real estate agent. This was something he transitioned into at the age of 22. It had taken him 3 years to start (as proper training and schooling was required). Upon completion of prerequisites, he began immediately, making residential sales in neighborhoods such as the Financial District, Tribeca, Soho, West Village, Upper West Side and up to todays most coveted areas: Hudson Yards. Beginning his career strong, under real estate broker Century 21, Corcoran and The Nassimi Group, Ienna was able to bring in many record sales, as well as obtain an iconic client list with artist such as Jonathan Cheban, Joseph Sikora, Dina and Lindsay Lohan and most recently, an artist we all fan over, but are unable to disclose JUST yet due to NDA agreements. (But not to worry, more updates are soon to come)…

However, what truly stands out is Ienna’s methods for promotion being unconventional. Unlike traditional marketing efforts, Ienna uses his social platform to engage his followers in what is available as well as make business communications. Currently working for Elegran Real Estate this has shown to be quite successful, renting places in as quickly as 4 hours of social posting on stories.

It’s impossible to know what Ienna will be working on in the next five years but we are certain that, based on his natural hustle and impactful resume, will be something worth further speaking on.

Feel like a French Girl in Chalonne Luxury Watch Straps!

Slowtide is The Cool Beach Towel Company About to Get Big