There is no one (in my opinion) more deserving of Model of the Year than Gigi Hadid. I remember seeing her years ago in a photo when she still looked like a child. However the combination of her angelic and exotic face was beautiful. Even back then Hadid had an irrepressible light that came through in the picture despite being surrounded by eight up-and-coming models/actresses. Yes, she is gorgeous and has landed an enormous amount of modeling campaigns; but when the beauty radiates from within as well — the person becomes unstoppable.

The 21-year-old was presented with the prize by fashion designer Donatella Versace at the Royal Albert Hall in London for the 2016 British Fashion Awards. The American model was up against her younger sister Bella, Kendall Jenner, Adwoa Aboah and Lineisy Montero. Gigi and her sister Bella Hadid, also a very successful model, support each other fiercely and are each other’s biggest fans.

Joining stars such as Karlie Kloss, Kate Moss and Salma Hayek for the star-studded event, Gigi made an impact in a custom made a-symmetrical silver jumpsuit that looked like a ball gown from the back with a full train. Hadid looked stunning while rocking the Atelier Versace design that had a black lining and even incorporated an on-trend choker look with the fabric weaving from the bust up and around Gigi’s neck. 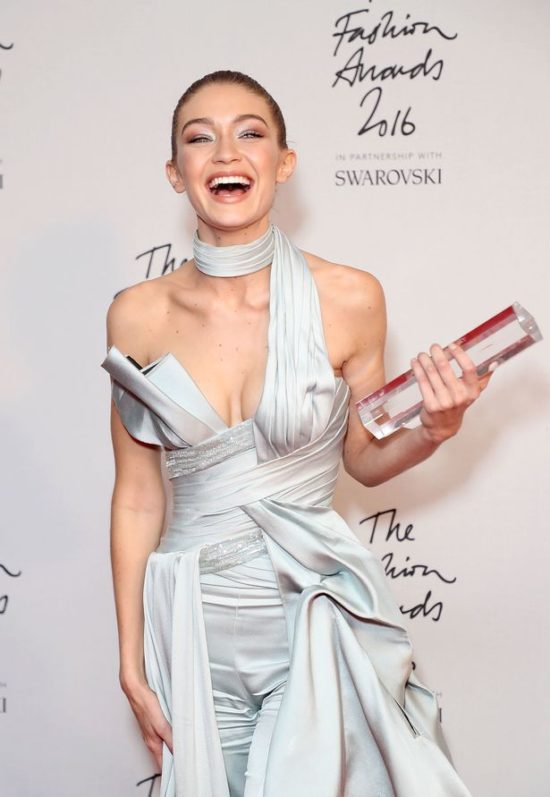 It’s no secret that Gigi Hadid has had an amazing year, walking the Victoria’s Secret runway alongside her sister Bella, hosting the American Music Awards and topping year-end lists like Instagram’s person who gained the most followers. However she still remains humble and at times caught off guard by her own success. After Donatella Versace presented the award to Gigi, she got emotional during her acceptance speech. “This is so crazy,” she said before acknowledging her record-setting Instagram following and other social platforms. “I just want to say that I know that I’m in the generation of social media, and I’m so blessed for that, but the fashion industry is my family, and you guys are the ones that I’m here for.”

So who is Gigi Hadid… 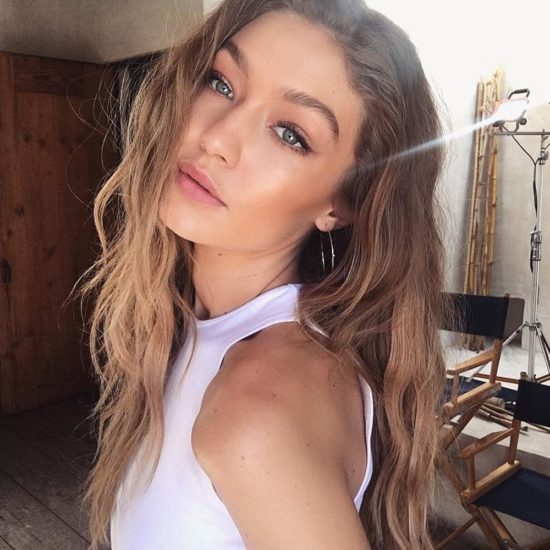 Jelena “Gigi” Nour Hadid, one of today’s most prominent super-models, has taken the fashion world by storm. It is common knowledge that Hadid’s mother is Yolanda Foster, one of the previous stars of The Real Housewives of Beverly Hills. However, what most people don’t know is that Hadid’s father is Mohamed Hadid, a real estate developer from Palestine. Her father’s family fled to Syria after the war and then migrated to America, where he has become one of the most important names of Palestinians living in the U.S. After a recent Instagram picture posted of her Henna tattoos, Gigi Hadid told her followers that she is proud to embrace her heritage as half Palestinian.

Her fans appreciate her attitude as well: Hadid seems to be aware of the many advantages but still tries to be as down-to-earth as possible, which is very smart. She credits her upbringing for her sense of solidarity. Hadid started modeling as a baby, when the co-founder of Guess, a family friend, cast her in ads as a toddler. Yolanda Foster, Hadid’s mother and a former cast member of The Housewives of Beverly Hills, told Glamour, “As a little kid everybody wanted to shoot Gigi, and it just never felt right to me.” “I let her model a little bit until she was 8 or 9 years old, and then I completely pulled her away until she was 17.”

Hadid enrolled in college at the New School until she was inundated with modeling opportunities. She made her official debut as an adult model as the face of a Guess campaign in 2015. That was followed by numerous walk on the runway for Mark Jacobs, Michael Kors, Chanel and Max Mara. She’s also a Maybelline spokeswoman — but still attempts to keep her personal life free of #branding. Hadid noted, “All the companies I work for want me to guarantee how much I’ll post for them, but I’m not going to force my career onto the people who follow me.”

She looked fabulous in the annual holiday Victoria’s Secret Fashion Show and has a very refreshing attitude about not being “stick thin.” Hadid has admitted to having curves and how heathy that is. Apparently it took her three times before Victoria’s Secret said yes. “This didn’t just fall into her lap,” according to Foster. Apparently Hadid missed it twice and this was her third try.  “That’s part of the game,” Foster notes. That might just be an integral part of Hadid’s allure — she understands the game, takes it seriously but keeps it all in perspective as well.

Whether Hadid is working the runway, landing magazine covers, modeling campaigns or reaching that next goal, she has a bright future ahead. I like her in interviews and in all honesty, Hadid has always been one of my favorites. She reminds us that it’s about the work. Regardless of anything else — it’s up to you. Congratulations to Gigi Hadid!!

A Fashion Tribute to The Rocky Horror Picture Show in Milan