Davis Factor has a career that most people could only dream of. As the founder of Smashbox Studios that’s been a Los Angeles haven for photographers like Annie Leibovitz, Herb Ritts and Helmet Newton over the years, the co-founder of Smashbox Cosmetics (which was acquired by Estée Lauder in 2010), and a legendary photographer in his own right who’s shot the most famous faces in the world like Angelina Jolie, Matt Damon, Keanu Reeves, Paris Hilton, Kim Kardashian and more, Davis has finally launched his first (and much anticipated) book with Rizzoli. Just in time for the Holidays, Make S#!+ Happen is the must-have coffee table book of the year that encapsulates Davis’s lifelong work in the cosmetics, business and photography industries. LAFM sat down for an exclusive interview to speak with Davis and learn all about his life leading up to the launch, check it out below! 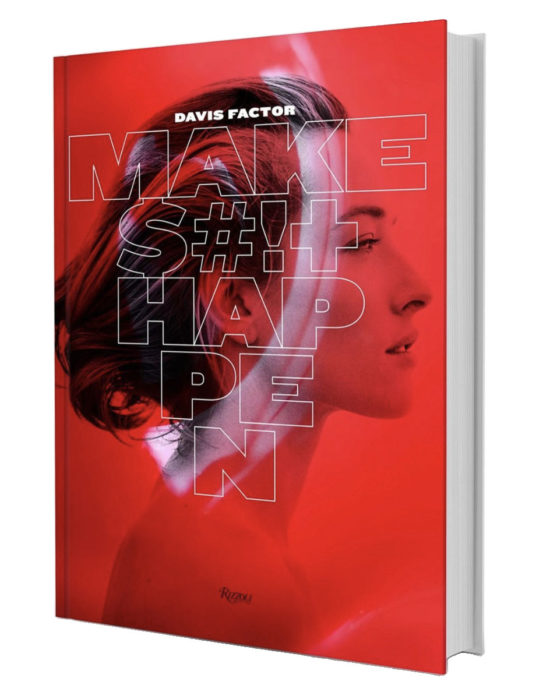 LAFM: Davis, we’re so excited to share your story with our readers at LAFM, can you tell us about creating Smashbox Studios and Smashbox Cosmetics and ultimately launching your first photography book?

Davis Factor: My photography really is the nucleus of everything for me, it was first the photography then we created studios, we later wanted to go into developing makeup that would look best in photos, everything really built off the other. It all was a very organic thing, and although at times me and my brother Dean (who was my partner in these endeavors for years) didn’t know what we were doing, as the businesses grew we were able to hire the right people-who did know what they were doing and make each business really thrive.

When I went about thinking of creating a photography studio, I really wanted to create a welcoming atmosphere as soon as someone walked through the door. Often times I would go to studios in New York to shoot and it felt like I was at a party I wasn’t invited to, so when I was creating (what would become known as) Smashbox Studios I really wanted something different. As a photographer myself I went about thinking what I would want there to make it flow. I worked with Phillip Weingarten who had created Studio Stropa to help me bring the vision to life. He had great contacts he was able to send my way including Annie Leibovitz and it really just took off from there. In 1992 we officially founded Smashbox Studios and moved to a bigger location in Culver City that was really ideal -it was close to the airport, the westside and Beverly Hills. Through our connections and after working for years with prominent photographers, magazines and brands we also began hosting events with Vogue, hosting Los Angeles Fashion Week and much more.

Eventually we started creating other businesses to help our studio business, the modeling agency PHOTO/GENICS, a production company, a digital company and then Smashbox Cosmetics. We wanted everyone who came into the studio to hire all of our ancillary business, and it worked!

Davis Factor: Of course, makeup has always been part of my family. My great grandfather created what was then known as ‘movie makeup’ and now is what’s considered standard ‘makeup’ in 1909, so it’s always kind of been part of my family’s DNA. When I began photographing people in my studio, I was thinking of ways that makeup could look better in photos-whether it was in a studio setting, on a red carpet, or even on the runways. We worked with renowned makeup artist Paul Starr to create the brand, but it really started by us giving people tips and makeup tutorials so people could look their best in photos. The idea was that we could make your makeup look better with some easy to apply products you would use before you start your makeup routine. I invented the ‘Photo Finish Primer’ that smooths your skin and pores before you apply makeup, making your skin look flawless in photos. We also wanted to use less chemicals that were bad for your skin, and were very conscious of creating products that had not been tested on animals, and were PETA friendly, which at the time no one else was doing.

We really started to build the brand from the artist perspective, I shot all of our ad campaigns, and we wanted to show people how amazing this product could be in a fun, fresh way. I’m very good at hustling, and I can wear a lot of different hats and I think that’s why our business endeavors have been so successful, many people who work with me are able to think outside the box and have creative visions for our brands that really make people think. I’ve been lucky to have a beautiful team with me-some for almost a decade that have really contributed to the overall success of the different brands.

LAFM: Your Photography Book includes some of Hollywood’s biggest A-Listers, including Morgan Freeman, Keanu Reeves, Angelina Jolie, Paris Hilton, Robert Downey Jr., and Matt Damon to name a few, can you share with us any stories of working with these famous faces?

Davis Factor: Haha I’ve got so many stories it’s hard to even remember them all, but one that really sticks out is one time Annie Leibovitz was shooting in our studio for Vanity Fair-and it was a photo of all of the biggest directors in Hollywood at the time: Martin Scorsese, Francis Ford Coppola, Steven Speilberg and George Lucas. They were all waiting in a room before the photo and I didn’t want to bother them so I pretended to be the coffee guy for about half an hour, doing little assistant things for them until Annie came out and said ‘Davis, what are you doing!’

We’ve really been lucky to have some legends of all different industries walk the halls of Smashbox Studios, and who I’ve been able to personally work with, some of which are featured in the book. It’s been an amazing journey to work with so many inspiring people, and I’m really excited to showcase in the book what my team and I have accomplished over the years.

LAFM: Speaking to that point Davis, can you tell us what you hope people will get out of Make S#!+ Happen?

Davis Factor: Ultimately I’d like people to get to know more about me and the scope of my work over the years. I’ve worn many hats and sometimes-even close friends only know one side of me, so it will be great to show people fully who I am.

My family has always been apart of the history and culture of Hollywood, so I’m excited with my book launch and exhibit to showcase my personal contribution to that as a photographer, businessman, entrepreneur and ultimately human being.

To get your hands on the Make S#!+ Happen book, head here! Davis Factor’s Photography Exhibit will also be open to the public December 8-16th at Sotheby’s in Los Angeles!

An Interview with Dimitry Loiseau; The Industry's Go-To Photographer