THE BOLD TYPE is everything we have been waiting for since the end of FRIENDS and SEX AND THE CITY.  It’s sexy, dramatic, real, and just the perfect binge show that lives up to what its trailer promises. And while you might think you’re too jaded to fall for a series like this reality is it’s tough to make it through just one episode—or, as I did, the first five — without finding yourself strangely and startlingly invested in the series and its charming cast.

THE BOLD TYPE follows three young millennials —Jane, Kat, and Sutton—who, as it is with the power of three, met as assistants at Scarlet magazine (which is meant to represent the women at COSMOPOLITAN). And for those trying to relate to an old TV love… for the record we must say Jane’s the Miranda, Sutton is the Carrie, and Kat is Samantha.  Jane (Katie Stevens), will become the central character as it appears we go through all of her growing pains together allowing us to build that connection. In the plot she has just been promoted to staff writer after four years as an assistant and her stories are just all about her – the modern blogger. Kat (Aisha Dee) shows us a less plausible story as she was promoted to social-media director after only two years as an assistant. But you fall in love with her quick as she operates on emotion and is a true feminist that stands up to her beliefs and pushes forward no matter what. As for poor Sutton (Meghann Fahy), well, she’s just the sweet, ambitious girl that you just want to support in her journey. Yes, she is still stuck assisting a high-level editor named Lauren Park and though she changes departments, it appears the same – but she does have quite the office flame….actually, both Jane and Sutton do – and it’s STEAMY GOOD! 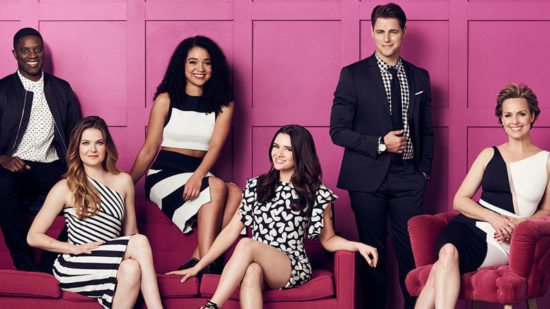 All in all, this is a feel-good, aspirational, and some may even call it “Pinterest-friendly” kind of show and we welcome it with open arms. Seriously, we all need a chance to sit back, relax,(maybe) order in and enjoy some wine as we escape to a world where everyone finds love, is ambitious and yes, all dreams are possible for those who are brave enough to chase them. Afterall, are we not all some form of a dreamer?