By the time that NYFW ends and Paris Fashion week begins, those that did not travel begin to clear their schedules to prepare them-selves for LA Fashion Week. But the question remains; where to go when it comes down to the shows? It use to be a tough battle to decide from overlapping shows, but in true LA form, the once so-called ‘Week’ has become a non-stop month of shows, presentations, installations and parties with great talent as the main event – So in order to make it easier we have decided to highlight what we felt were the best of the best and provide you some little footage – ENJOY!

ADOLFO SANCHEZ
Adolfo continues to amaze by showcasing “F.U.” (Freedom and Underground) in Los Angeles. Sharing his personal sense of Liberations – Freedom is a representation of how the designer has began to focus on himself as an individual and not just a designers. “I’m finally at a point in my career where I feel free to do whatever the F* I want without caring what other people have to say” said the designer – and we love every bit of it. The heavily gothic influenced style took us to an underground party away from the traditional fashion show and into a flash-back to connect with Sanchez. But to our surprise, your usual tall leggy model was not on the guest-list as strutting down the runway were some of IG’s common faces. This was definitely a show to snap and hash-tag. 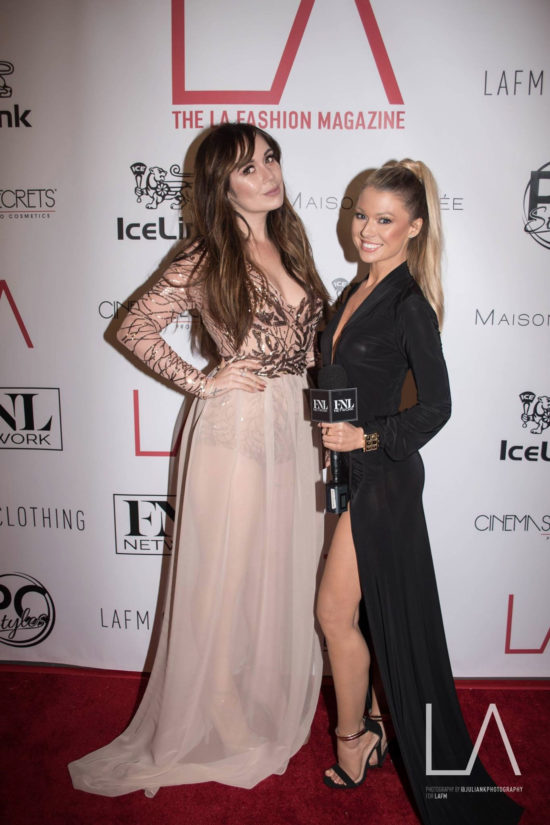 DAVID TOPAZ
Being transported to a world of elegance in Paris we are slowly channeling our inner Christian Dior with a touch of Chanel. Being pulled form the athleisure trends, we see Topaz re-invent sophistication through monochromatic silvers and blacks as he sends down pant suits, gowns, knee length skirt and everything feminine – down to the slick ponytail with flower detail applique. All the looks were cinematic and made us understand the understated sexiness to having less skin exposed. Our favorite? A fitted long dress with a high neckline hidden beneath a chocolate duster trench-coat. 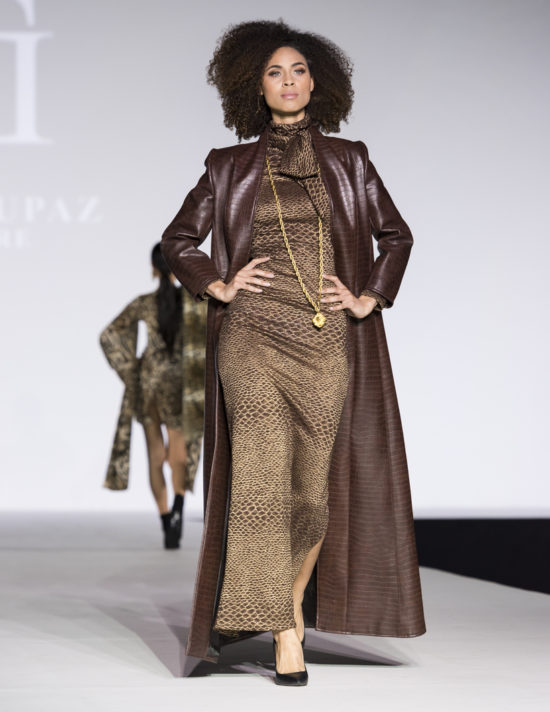 LISA NICOLE COLLECTION
Sleek-chic sophistication walked the runway as designer Lisa Nicole premiered her “S.T.R.O.N.G.E.R.” collection in LA. Taking inspiration from pain and turning it into fashion and power her looks demonstrated sharp lines and confidence. From deep V’s to peek-a-boo cuts seeing the contrasting fabrics of white to black with some metallic it was like seeing everything unleash into something beautiful. 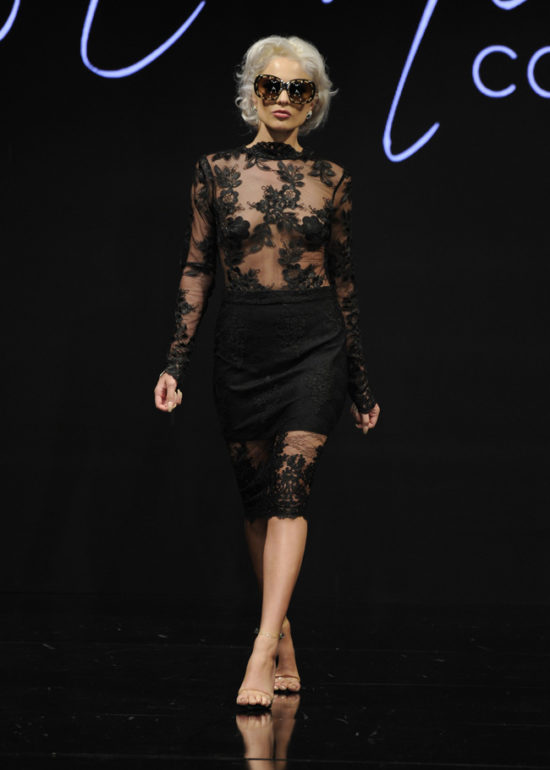 MARIO DE LA TORRE
A designer most recognized for minimalist designs and simple monochromatic colors had us all jaw dropped when he cut the lights and came back to a line cut entirely in vinyl. From cat suits, to capes, and even long gowns with trains the designer brought an exquisite material to life through these amazing creations…it was as if each model was dipped dyed into a bucket of paint and we were experiencing walking art in a second skin. The most memorable part of the show? When Designer Mario De La Torre and girlfriend Evette De Carlo announced that they would be having a baby girl – as before this announcement, we were told it would be a unicorn…after seeing this show, we believe in the magic. 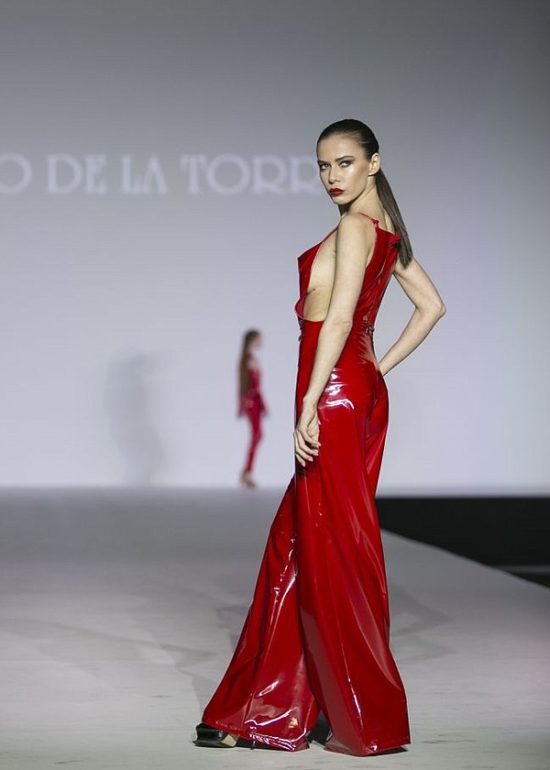 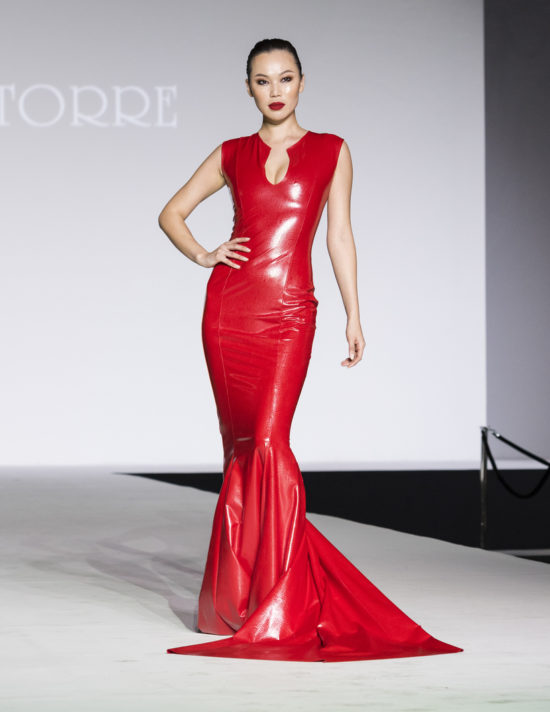 Oh Mister Triple X – this season we saw body con pieces and denim, and we want it all! The dresses were all skin tight with a hint of corset detailing; while the men showed us their ooh-laa-laa abs underneath denim jackets and paisley print bombers. But the designer took us away from the usual melted metals we have come accustomed to and into a hues of mint, washed blues, and black for men, while bringing powder pink, rose gold, blk and a deep red that is already on our wish-list. Our favorite piece? A black jacket with strips of pink matched back to a black and powder pink strip skirt with stud detailing. We loved this – ears and all! 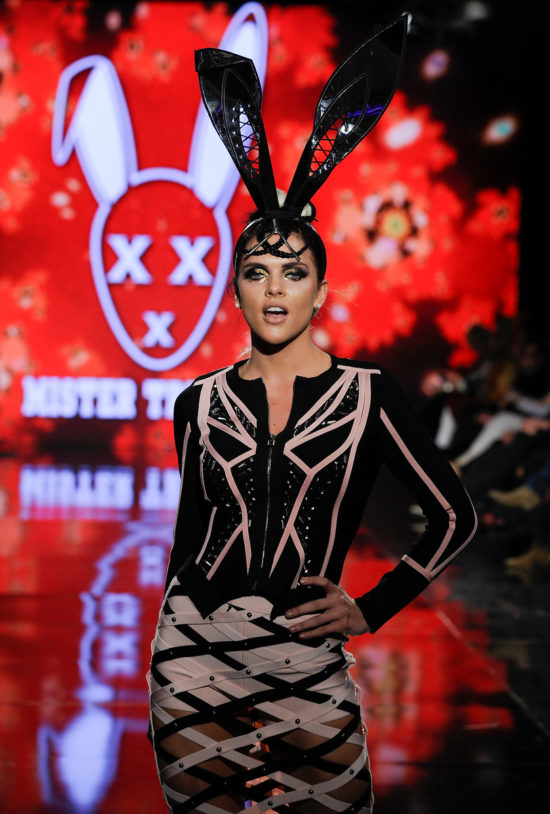 Other shows we liked were the following. Enjoy your front row views!

21 REASONS WHY BY MADELINE STUART 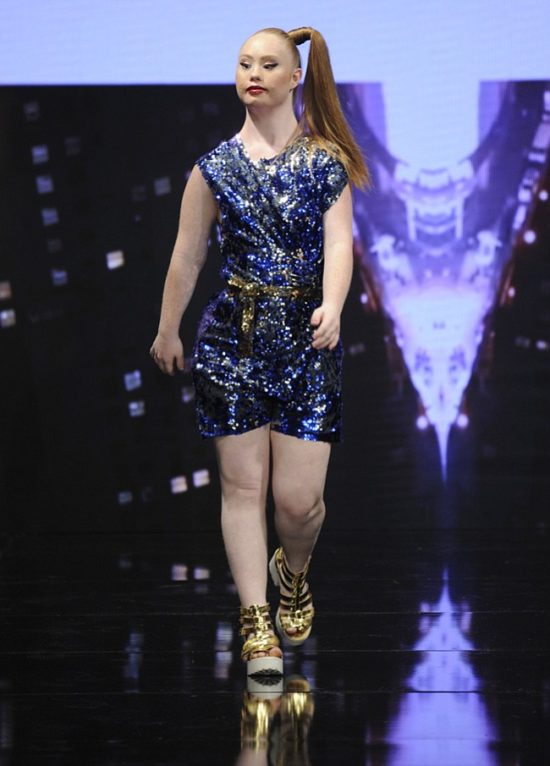 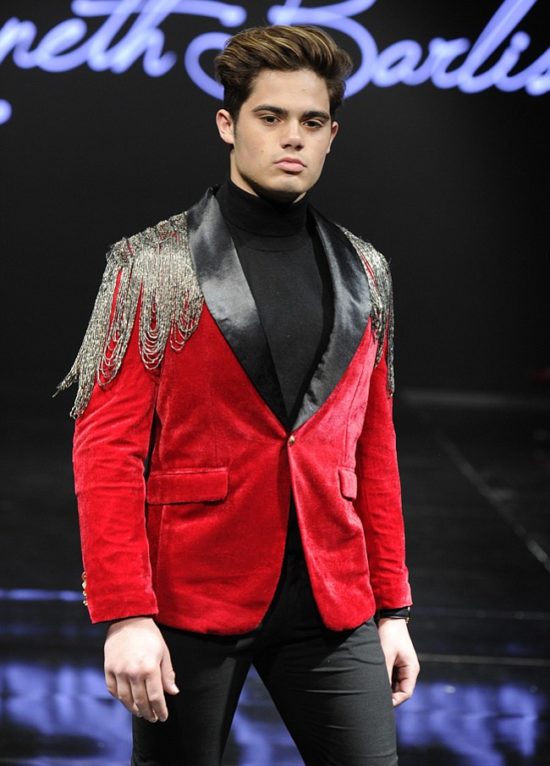 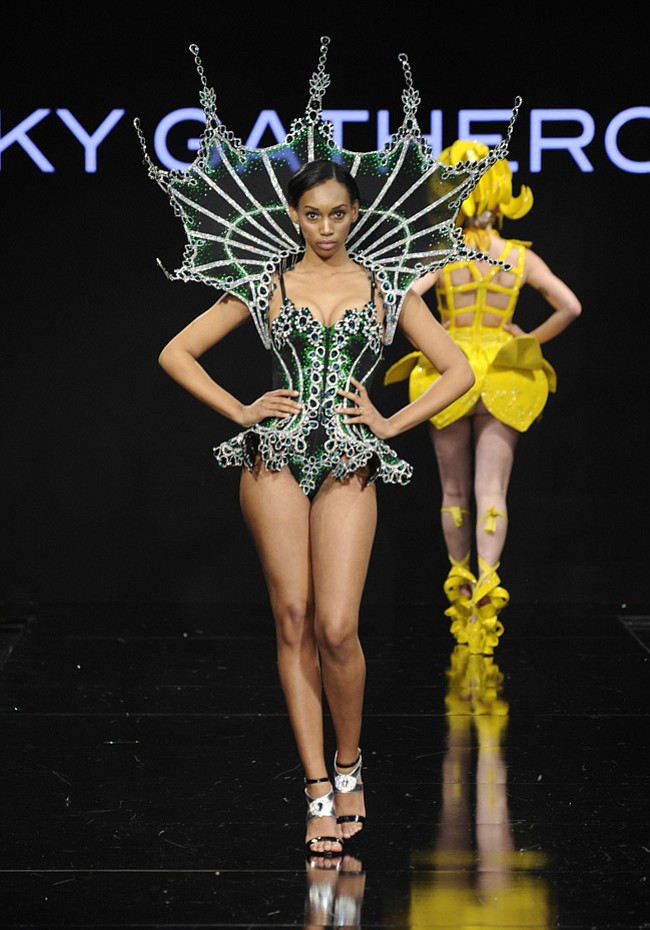 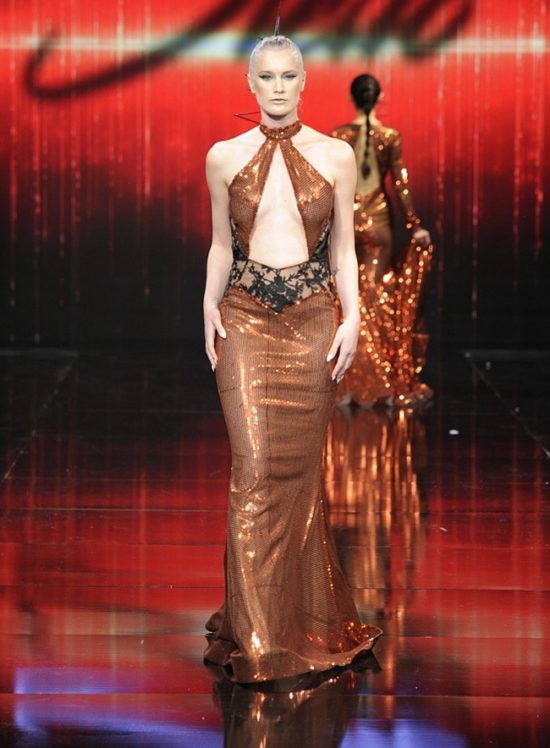 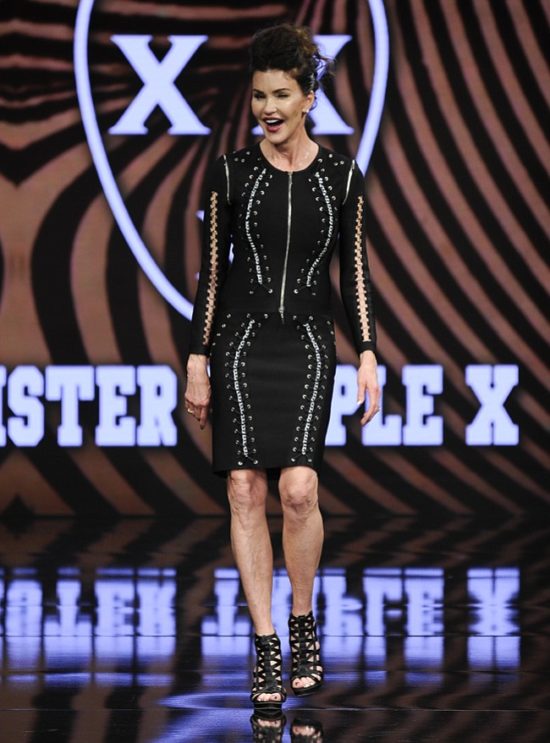 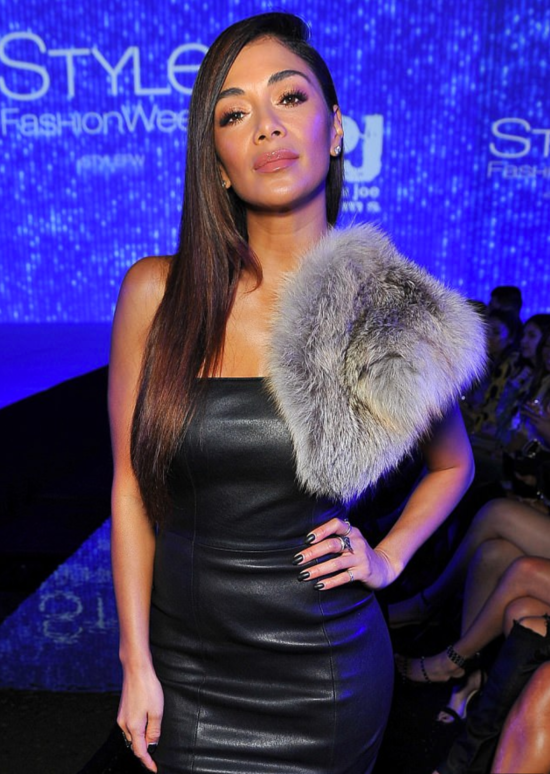 For more information – check out their websites!

Watches that don’t break the bank