Many may recognize Eric Bellinger as the writer who has worked on numerous #1 hit singles that we are familiar with today. However, by taking a closer look at how his career path has evolved so far and what he plans to accomplish in the near future, we are almost forced to view him as much more than just a songwriter. Eric Bellinger (songwriter, artist and fashion designer) settled into his career as a writer back in 2010. This was the time when important figures within the entertainment industry began to realize both Eric’s creativity and great potential as a songwriter. Artists were looking to work with Eric left and right and, today, he is able to say that he took a huge part in creating pieces for artists such as Justin Bieber, Chris Brown, Usher, and even Beyoncé and Rihanna. Several of the songs that Eric Bellinger has written have won remarkable awards. For example, Chris Brown’s album “Fame” won a Grammy in 2012 for Best R&B Album of the year. Eric Bellinger wrote 3 songs on that album. Although he has been extremely successful as a songwriter and will most-likely continue to write music, Eric Bellinger has been focusing more on his own music as an independent artist and is taking every one of his own projects very seriously. Eric Bellinger comes from a family that is also involved in music, so his decision to venture out and change his career focus from being a songwriter to becoming a successful solo artist was inevitable.

Eric Bellinger became more serious about his own music beginning in 2012. The transition, of course, wasn’t easy for Eric at first because he faced the struggle of trying to convince the people who already had him set in their mind as a songwriter, to now look at him as an independent artist. Although getting everyone else to accept the transition was slightly difficult at first, it was not hard for Eric to come up with an effective solution, which was consistency.

“I had to basically flood the market with content. I had to make it so that there was no getting around my music; it would be everywhere.”

Any doubts or skepticism that people may have had immediately faded once Eric released his mixtape, Eric B. for President Term 1, this September. The mixtape received such a tremendous amount of positive feedback that it not only reached #1 Album on iTunes, but also hit #14 on the Billboard charts. 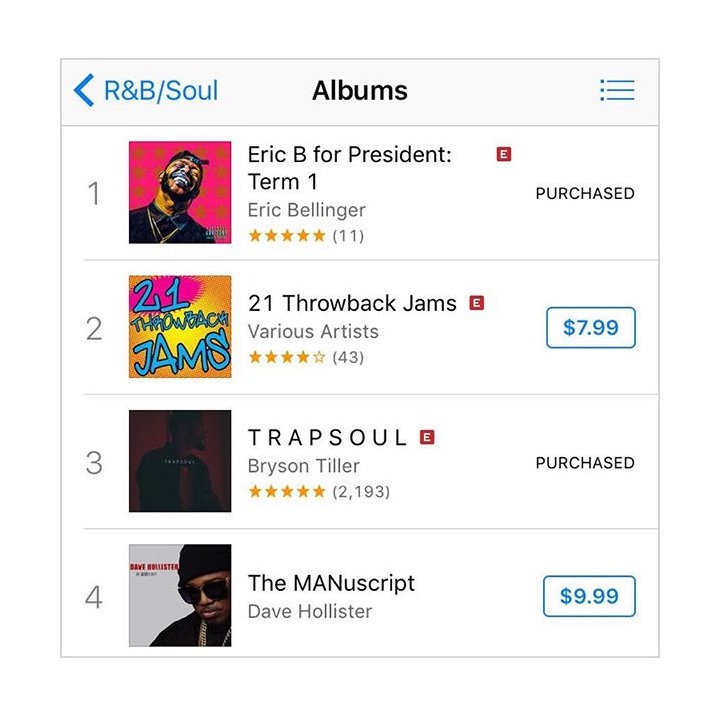 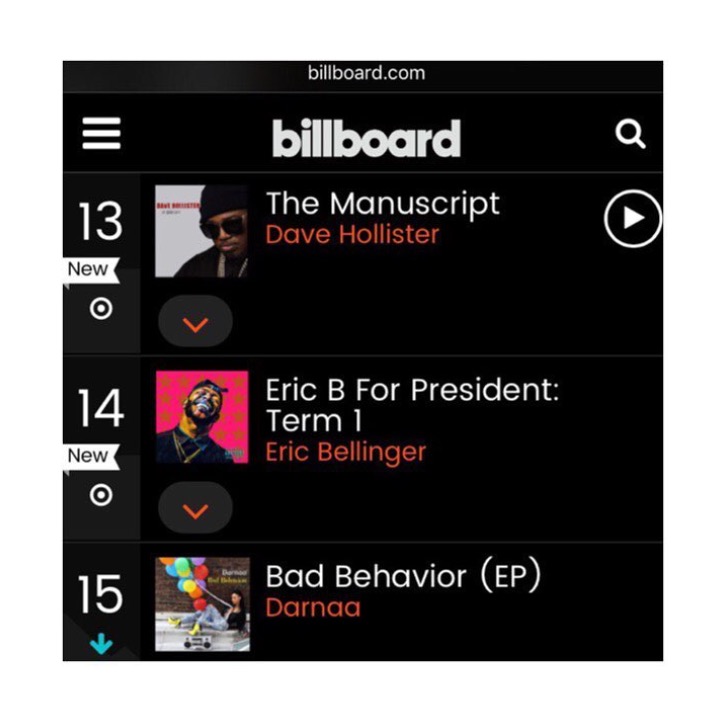 Besides the evident talent that was presented within each song on the mixtape, the artwork, done by Taj TPK, created yet another aspect of the mixtape that drew fans toward it even more. For each song, there is an artistic, animated photograph of an actual president to go with it such as President Barack Obama, Abraham Lincoln and John F. Kennedy. The artwork definitely matches the theme of the overall mixtape, adding even more to its originality. Artists such as RJ, 11:11, AROC, and Phil Ade are all featured in songs on Eric B. for President Term 1. The mixtape can be found on any music streaming site such as iTunes, Apple Music, SoundCloud, Spotify and Title. 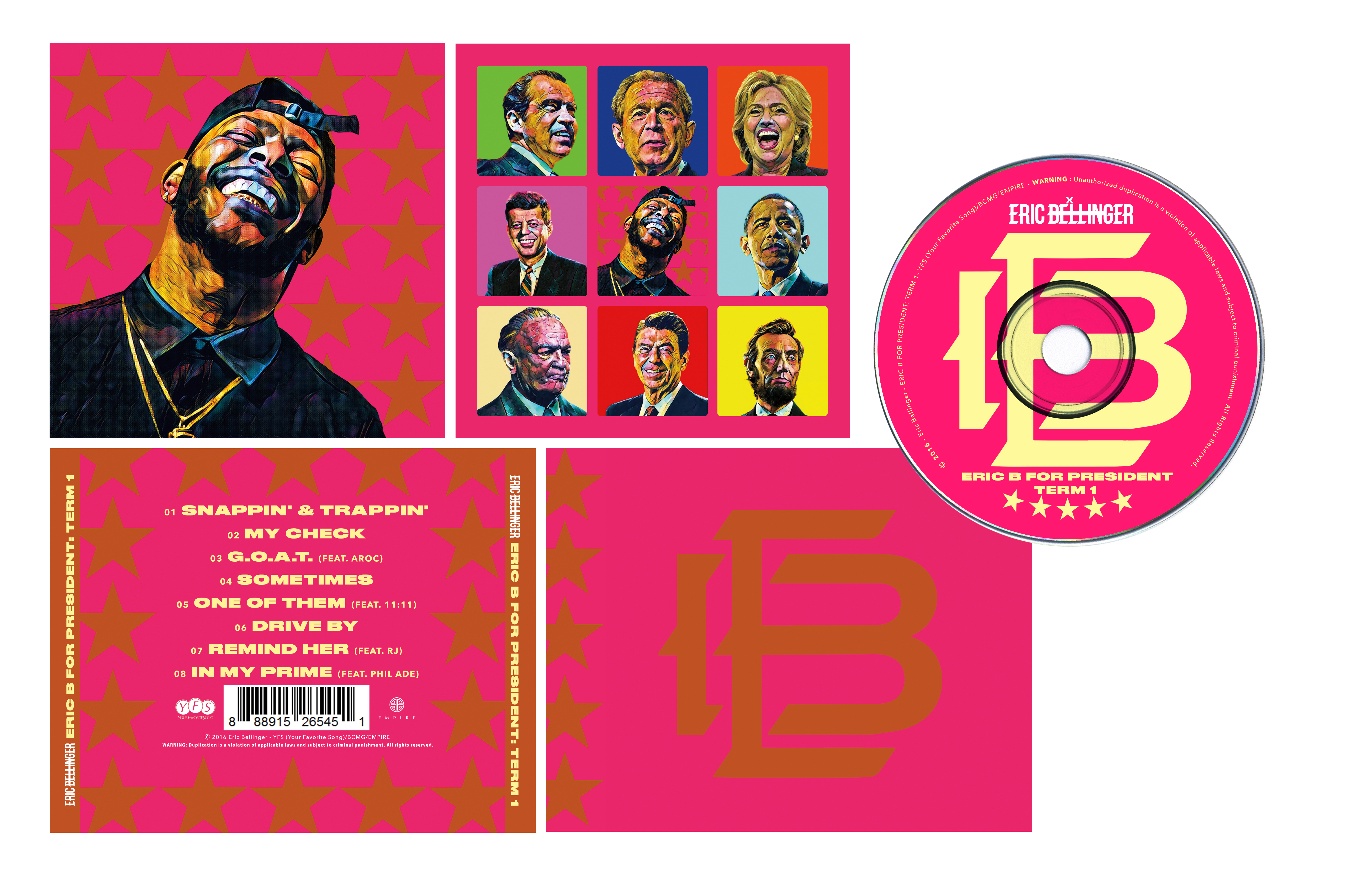 During this past weekend, Eric Bellinger was shooting the music videos for “G.O.A.T.” and “In My Prime”, both of which are from Term 1. All of Eric’s music videos can be viewed on his YouTube channel.

Along with having a strong focus on his music, Eric Bellinger’s fashion line is also evolving. The clothing that Eric makes can be found on his website. As of today, the line consists of Extendo Strap hats and Elongated t-shirts, but Eric is hoping to expand his collection in the future. For example, he shared that he is interested in adding a line of chains to the collection. The Extendo Strap hats are logo-based and come in 12 different colors. The reason for the extended strap on the hats is to create a sense of “old-school” fashion in a clothing article that is very modern and simple. This strap gives off a sort of vintage feel, which makes Eric Bellnger’s hat collection so unique. People purchase Eric’s hats in particular to really feel like they are not just wearing any generic baseball cap. As far as the t-shirts, the elongated style of the shirts is meant to provide a more sophisticated and classy look for men. The shirts come in 6 different colors. Eric Bellinger takes on the creative process as well as the designing process of his collection by himself. Despite his packed schedule due to his music and songwriting career, Eric takes the time to also focus on his fashion line and pays close attention to the details of it.

Even though Eric Bellinger has proven to be successful as far as his music and fashion line, his career is just getting started. Eric is continuously working on a variety of projects that will be released in the near future. For example, he recently finished an overseas tour selling out every location, and is going on tour again next week with Wale, an artist for whom Eric Bellinger has written music for. Eric also has a verse on Wale’s new single, “One Reason”. As far as being a part of other well-known artists songs, Eric Bellinger has hooks coming out on songs in E-40’s upcoming album as well as member of Outkast, Big Boi’s new solo album. Both of these albums will be releasing very soon. At the moment, Eric Bellinger is looking to discover artists to sign and mentor from all genres and areas of music. He is interested in working with artists, writers and even producers. Lastly, Eric B. for President Term 2 is in the works. Eric is currently working on features for this second mixtape as well as a release date. Just by looking at everything Eric Bellinger is producing right now, it isn’t hard to see that he is an artist who intentionally involves himself in many areas of the entertainment industry rather than focusing on just one part of it. This is someone who refuses to become complacent in one aspect of the industry, which would limit his creativity. Instead, Eric Bellinger does whatever it takes to achieve becoming a well-rounded artist. Of course, he nevertheless stays true to what he is the most passionate about.

“I take pride in being a singer and an entertainer.”

Follow the journey by keeping up with Eric Bellinger’s social media network as well as his app that  he recently launched. By searching “Eric Belligner” in the App Store, you can get a first look at pictures, music videos, and exclusive giveaways to fans. Also, be sure to keep an eye out for Eric B. for President Term 2.