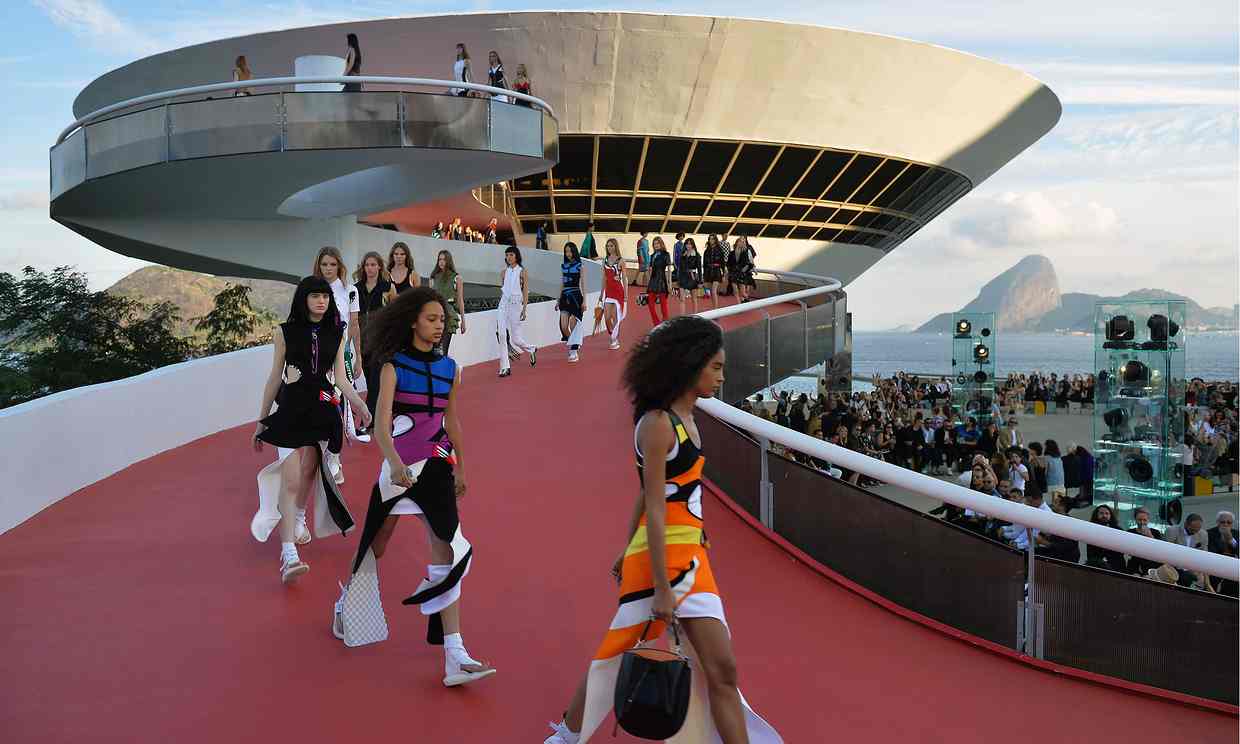 If there was one word that could sum up the Louis Vuitton cruise 2017 fashion show that took place recently, that word would be “futuristic”. The fashion show took place inside of the Mac Niterói, an art gallery in Brazil that was designed by Oscar Niemeyer. The Mac Niterói was designed to resemble a UFO, which perfectly fits the theme of the 2017 collection. When being asked questions about what exactly was going through his mind during the process of creating the unconventional building and about how the art gallery is able to relate to the new Louis Vuitton 2017 collection, Oscar Niemeyer, the architect of the art gallery, recalled back to the words of  Charles Baudelaire as he quoted,

“Strangeness is a necessary ingredient of beauty.”

This fashion show was, in fact, strange in all of the best ways. The Mac Niterói art gallery, which hovers above Rio de Janeiro  and is very similar to an actual spaceship, presented a sense of newfound beauty and glamour in the midst of a country that is undergoing so much present chaos. With the outbreak of the Zika virus crisis and with the grip of current recession going on in Brazil, the cruise 2017 show was able to create the image of both hope and transformation as the models strolled down the runway while wearing pieces from the collection that gave off the connotation of a sporty, yet futuristic theme. For example, some of the clothing that appeared throughout the fashion show include cape-backed dresses with wetsuit zippers as well as silk blouses that presented a clear inspiration from Brazilian art, especially from the Brazilian artist Aldemir Martin’s paintings of Pelé. Inspirations from Alder Martin’s work was evident within the Pelé-print jerseys that some of the models who were walking in the show had been wearing. These specific pieces are especially able to support the central theme of the show, which was a true fashion extravaganza. Nicholas Ghesquière, a French fashion designer and also the current creative director of the house of Louis Vuitton, expressed that his ultimate goal was to aim toward integrating Brazil’s athletic culture with his futuristic creations. Ghesquière says,

“I have always loved the clothes that women wear on city streets, and I am obsessed with sport and with movement. Here in Rio, beach life is urban life.”

With the Olympic Games about to happen in the country in just two more months, Brazil proves to have definitely been an efficient choice as far as the location of the Louis Vuitton fashion show. The 2017 collection challenges and transforms the brand’s well-known culture of boxy trunks with brown and gold colors, and has developed Louis Vuitton into a brand that seeks fashion’s next dimension.

A-list celebrities such as Alicia Vikander, Zendaya, and Jaden Smith all made appearances at the cruise 2017 show, looking spectacular while wearing their best of Louis Vuitton.