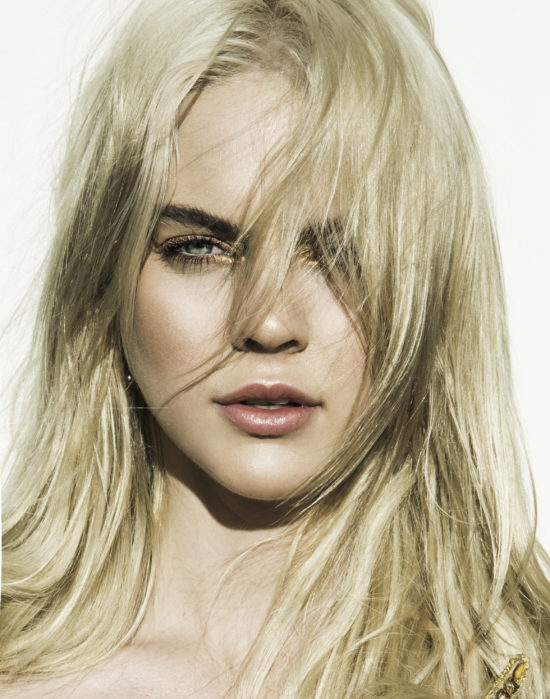 Upon meeting the 23-year-old Rachel Harris, one is struck by her shy demeanor. You’d expect her artwork to be of the same fragility, but Harris’ abstract paintings elicit a dark, gritty and even bold sensibility. All of her painterly works have been made using construction materials. Rachel builds the frames herself; frames that are often twice her size. Harris is a hands-on artist, she likes to sweat and crawl on the floor, as a part of her process. Her desire is to do it all with her own two hands. Despite her small frame, one would assume she could barely wield a hammer, yet this young lady has renovated three studios in Downtown LA reconstructing everything to suit her needs.

Harris recently purchased a bus and refurbished it, pulling up all three layers of carpet that she found. Another surprise lurking in Rachel’s uncanny history is that she used to race motorbikes until she broke both of her legs, ankle, and a number of fingers – now she putts around on a moped.

Perhaps the most unexpected element of this young woman’s repertoire is that although Harris is introverted and shy, she recently modeled for Playboy Magazine, becoming Playboy’s Miss November 2015. Naked and covered in paint, Harris took it as an opportunity to use her own body as a canvas.

Nikki caught up with Rachel Harris to dig a little deeper into her art practice. 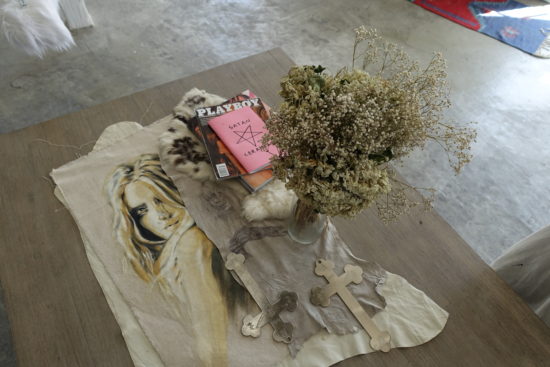 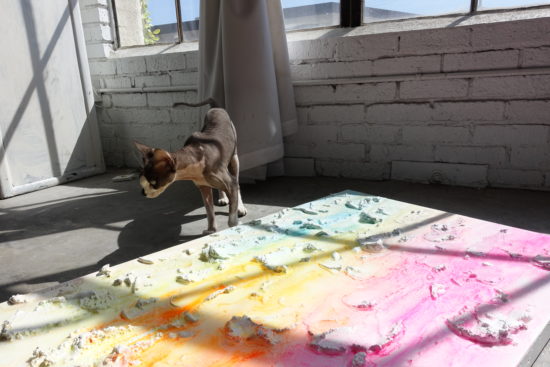 You studied at FIDM – tell us about your time there.

I did one year of fashion design and illustration, my intention being to one day teach at FIDM. I also studied at the California College of the Arts, which was smaller and more pressurized than FIDM. At FIDM I felt I had access to more relevant things and to helpful industry connections. Plus it felt more open and creative. Their after care program is also great – they take pride in their alumni.

How did posing for Playboy come about?

My manager introduced me to a Playboy photographer and I trusted the vision they had for my shoot. Once I found out I was the November playmate, I basically stayed home, exercised and trained as if I were training for a marathon.

How did your family react to you posing for Playboy?

I come from a family of predominantly women. My grandmother, my mom, and my two sisters all rallied for me, and were very supportive. They knew the Playboy shoot would give me the opportunity to be represented as a public artist. And since I’d never modeled before, and they know how shy I am, they were like “Wow! Go Rachel.”

Will you do other nude photo shoots?

I wouldn’t want to do it again. The Playboy shoot was perfect – I trusted the photographer, I thought it was tasteful, and I don’t think I need to do it again…but I might.

What does your artwork mean to you?

I started drawing at 5 and always knew I wanted to be an artist, it’s become part of my identity. I put a lot into my artworks. I build the frames, and they are really large, so it’s no easy feat. I’m still exploring and never really know how a piece is going to end up. It’s trial and error, and I cannot recreate one once it’s done. I wish I could.

What would you like the future to hold for you?

I hope I’m doing the same thing that I’m doing now at a more established level. I want to be a public artist and represent art so young girls can see a face behind the art. I’m always pushing against someone’s opinion and I like to change people’s ideas about me. I don’t want to be put in a box. The dream is to do what you want.

You can view more of Rachel’s work on the Hill Street Country Club Gallery website. She is currently showing in a black metal exhibition.

Take the world with TREC