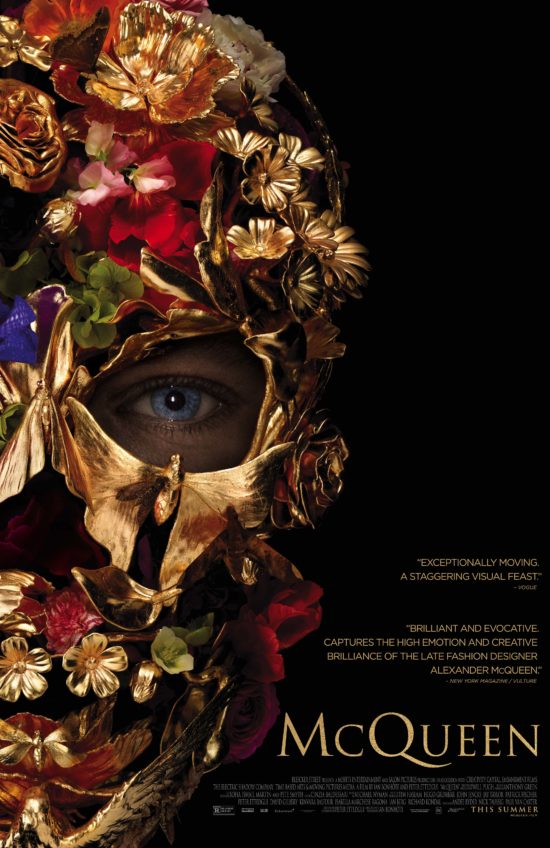 The man, the myth and the legend of Alexander McQueen is unveiled in the latest documentary by Directors Ian Bonhote and Peter Ettedgui, and Executive Producer Lady Kinvara Balfour. With a premiere in London and LA and opening in theaters today, July 20th, the genius of British designer Lee Alexander McQueen is displayed on the silver screen, as his talent, troubles, and romance shape the identity of the young man who tragically passed in 2010.

McQueen broke boundaries, took risks, and shocked audiences of his shows with his themes, set designs, and bold fashion. From his early days as a tailor at a men’s shop in London to his years as Creative Director of fashion house Givenchy to focusing on his own namesake label, McQueen constantly gave his supporters and haters a crave for more. Some deemed his shows horrifying, as his show titled ‘The Highland Rape’ featured women hobbling down the catwalk in gowns slashed to expose their breasts or genitals, while his other collections such as ‘Voss’ were uncomfortable, breathtaking, and scandalous. 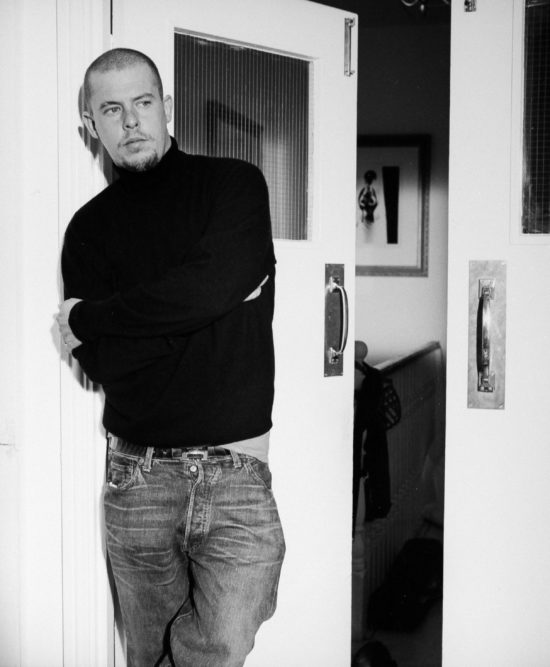 McQueen was more than a fashion designer, he was an imaginative visionary like the world has never seen. While other designers of his time were creating illusions and unique hair and make-up on the catwalk, McQueen was having a model doused in spray paint by two robots; others were featuring elegant haute couture runway shows, yet when McQueen was at Givenchy he created a mystical, ethereal  environment complete with male models as Cupids and covered in gold body paint, and models wearing feathered gold breastplates under perfectly tailored pantsuits, and extremely chic animal printed dresses. McQueen was like no other, the documentary McQueen exonerates his life, it’s an ode, a part-autobiography (as many pieces of footage were taken by McQueen himself), and a legacy allowing audiences worldwide to understand the struggles, inventiveness, and the romance behind his famous label.

The LA Fashion Magazine was lucky enough to sit down #LadyoftheHour, Executive Producer of the McQueen film, Lady Kinvara Balfour. Lady Balfour, or #BadassBossLady as I like to say, has a background including fashion, tech, theatre, and film, she’s advised and directed tech start-up launch strategies, is the creator of The Visionaries, a collection of mini-films shot on iPhone (which include the likes of Tom Ford and Anna Wintour), and most recently was highly involved as EP in the McQueen documentary…can you say she’s #killingit?!?! We wanted to know her thoughts on the movie and what she hopes viewers will take away from the film, check it out below!

LAFM: Kinvara, you’ve been in the fashion world for a long time, and came on to the project not only for your love of McQueen’s work but because you had many contacts within his inner circle that ended up being extremely useful in the film. Can you tell us what your role as Executive Producer entailed?

Lady Kinvara Balfour:  I’d heard about the project and when I met with [Directors] Ian and Peter, I was so intrigued to find out how far they had already gotten, and we all got along so well-I really believed and trusted their vision and really wanted to come on board and help. I came in solely on the creative side…my message to friends and colleagues of mine we wanted to interview, those who knew him personally, was just to say that this was a genuine project and going to be a very respectful portrait of the designer, it’s not salacious and not going to be scandalous, it is totally respectful. That was really my job, to come and represent Ian and Peter with the respect I knew they deserved in making this film.

LAFM: The film includes the brilliant creations he made, as well as his personal struggles, do you think that was important to include in the film?

LKB: At the end of the day he tragically committed suicide, and I think it’s interesting to look at the journey that takes someone to that end. There’s a lot of the themes of mental illness and mental health, things that are so spoken about today, but was really more taboo 20 years ago. I like that the film touches upon those, yet his demise is not blamed on any one thing, I think on some level we can all relate-if you’re a creative genius, you’re always going to be struggling and slightly tortured by your brilliance and genius. I don’t think you can make a film about him without looking at the darkness, because I believe in doing so, it really honors the light.

LAFM: Kinvara your background includes being in film, tech, and fashion, specifically you were a fashion assistant turned fashion editor for Proctor & Gamble worldwide, what can you say from your perspective about the evolution of McQueen’s designs, from shocking shows like The Highland Rape all the way up to Plato’s Atlantis at the end of his life?

LKB: I think one thing we really need to remember about McQueen’s shows is that they were being put on in a time before Instagram, live streaming, and even iPhones; Now, we all look at Instagram and see these incredible resort shows with top fashion houses spending millions to put them on, but in the days of McQueen, those shows were shown to a very select few, to editors and buyers. I think the impact and his legacy is greater when you see a show like Voss or Plato’s Atlantis because you didn’t see it on Instagram, it’s just on youtube possibly or it’s archive footage you have to seek out, so it was really beautiful to see it on the silver screen-it almost allows you to experience it as if you had seen it live. 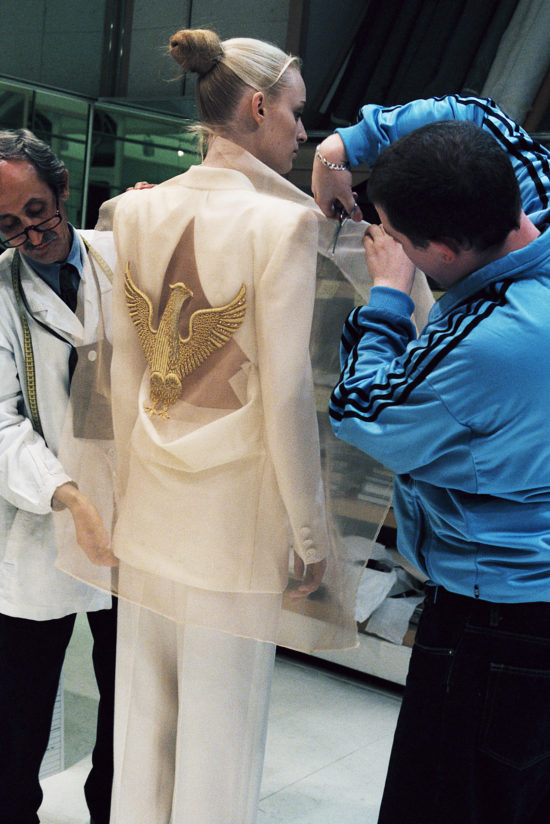 Coming from a fashion background, it’s amazing to see the type of risks McQueen took. If you were to have a show like McQueen’s Voss show today-with models like Kate Moss wandering around dazed in a mental asylum set and you make the press sit in front of a two-sided mirror so they must look at themselves uncomfortably until the show starts, you’re going to create some reactions, good or bad. McQueen was bold, and regardless of the extravagant sets he built, the clothes he designed are true works of art. For me, I saw the evolution of his fashion, but also the hair and makeup and the technology he was incorporating in each show. I think you can really see it in the film as well that he wasn’t just evolving as a designer and fashion architect, but was evolving the fashion world itself.

LAFM: The Directors Ian & Peter don’t come from the fashion world, what can you say to that point, making a movie about one of the most famous fashion designers without a fashion background?

LKB: What’s great about Ian and Peter is they’re not editors who were at his shows, they weren’t from his inner circle…I quite like that rebellious spirit, I quite like being on board with a project that has the same curiosities about a man’s life as another. I think that if their backgrounds were in fashion, the film might’ve taken on a completely different approach, and now it stands as a beautiful film about a man’s life, and that man’s life included the fashion world. 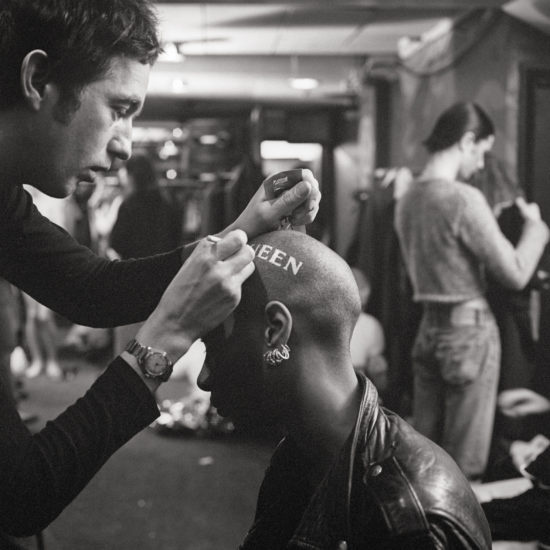 LAFM: You seem to really understand McQueen, the dark, and the light as you so clearly helped maneuver the creative vision of the film, do you have any personal projects that you would relate to McQueen’s?

LKB: I’ve actually written two plays myself, and the second one is quite dark. I’m all about the immersive experience, its something I’m so fond of from his shows-as an audience member you’re given more than just a fashion show, you’re given a once-in-a-lifetime experience. I have a background in technology as well, specifically VR, and many of my friends, some of whom were included in the film, have one of a kind Lee Alexander McQueen pieces that I’d like to one day to a project with. Whether it’s a fashion show featuring these exclusive pieces with a tech element or a VR experience, I’m not sure, but his legacy and his works of art deserve to be seen. 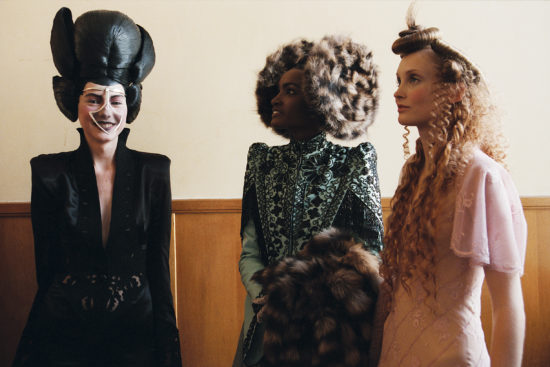 LAFM: And lastly, what do you hope viewers can take away from this film?

LKB: I think that people should see the true courage he had, anything is possible and he made anything possible; you just have to listen and trust one’s own instincts-and keep challenging the status quo! That’s what he did, and that’s what I love to do, keep people guessing! We used some clothes at the end of the film, on loan from one of my friends who has a private collection, and it was really wonderful because throughout the film we dealt with people-interviews, home videos, runway videos of his life, but the end there are no people, just these fantastic clothes on a mannequin. They have a real aura and spirit to them, when you see them you feel you’re in the presence of real greatness, each one felt like they had personalities themselves-each one was producing a different emotion. These are real works of art, and that was the legacy he left behind, his designs and his vision did and still do have life in them. 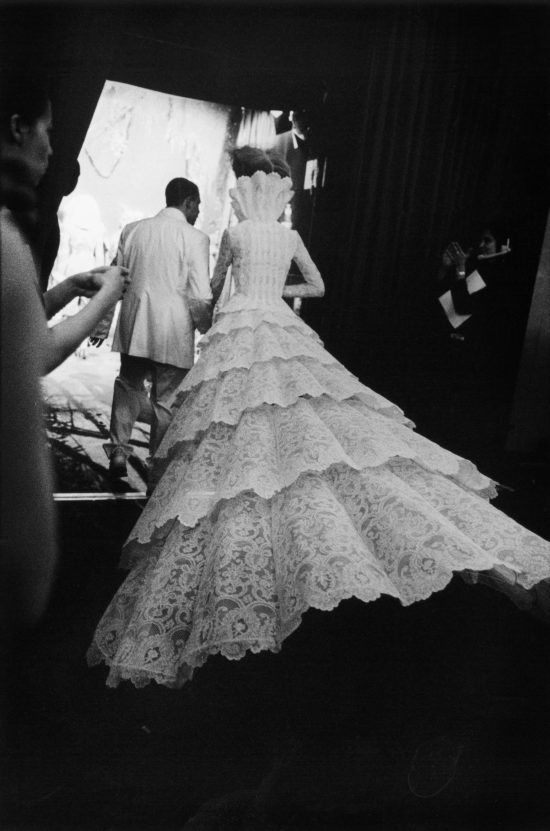 Premiering at select theaters nationwide today, it’s a must-see for all ages, so be sure to get your tickets now at this link: https://bleeckerstreetmedia.com/mcqueen and be sure to check out the trailer here: McQueen-Documentary-Trailer