Your Summer 2016 addiction has arrived!

Molli is the perfect accessory for the Los Angeles fashionista. This brand features gorgeous, vivacious attaches! The casing consists of an upscale aesthetic with colorful options that playfully balance the structured design. Although Molli has travelled all over the world, from Patagonia and Guatemala, to Mexico and Aruba in the Caribbean islands, she is intrinsically well-suited for American culture, particularly the ocean front cosmopolitan city of Los Angeles. Molli is a summer essential because its spacious compartments and fashionable composite permit the seamless transition from brunch to beach, shopping to music festivals or office to happy hour.

Molli conceptually derives from “Molluscs,” invertebrates with soft bodies. Similar to its namesake, the stylish export is intrinsically malleable, doubling as a compartmentalized handbag and fashionable headrest. Indeed, the designer noted that she “imagined everyone sitting on the beach with vibrant pouches along the shore, almost like beach clams or sea molluscs.”

Molli hails from Melbourne, the metropolitan, cultural capital of Australia. It was created by Cool Girl Catherine McKay who thought of the concept after a trip to the beach. After expressing difficulty in becoming comfortable, Catherine stated, “I then discussed with my friend why no one had invented a fashionable headrest. One where I could go to the beach, strip down to a bikini, put my clothes in and use as a pillow!” Genius. Before creating the summer 2016 “It Bag”, Catherine worked for high-end Australian designers for a decade, she even spent a few years “as the ambassador and national Personal Shopping manager for Topshop Australia.” 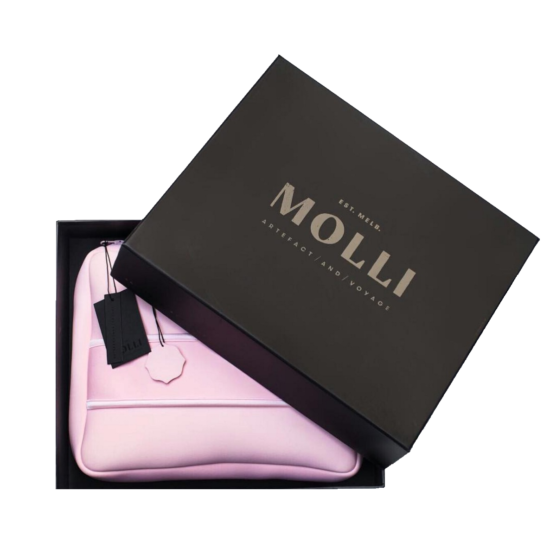 Catherine’s creativity extends to visual imagery as well, as evidenced by her co-production of the lively Molli Short Film. Catherine’s appreciation for style and substance is evident in the construction of the stylish tote. Each Molli is individually crafted by a boutique manufacturer, and composed of Neoprene, a soft, durable, synthetic rubber that can withstand high temperatures and damages from everyday use. The practical and physical aspects of the material also attracts the male gaze. A Molli customer noted that during a trip to the Philippines, “she found her boyfriend starting to put things in there [Molli]…By the end of the trip, he’d decided it was his and kept it for himself.” Molli customers should probably pick up an extra (or two) Molli for your roommate, boyfriend or best friend, you’ll thank yourself later when you find your loved one has adopted your favorite accessory.

Molli’s composition permits the inclusion of a variety of products and necessities. The case effortlessly holds anything and everything needed for your professional and personal excursions, including makeup, electronics, candy, water bottles, clothing, etc. At the beach, the designer usually fills her Molli with her “GoPro, a good book, spare beach shorts, a light sweater…[and] an apple or a sweet snack.” If headed to Pilates from work, her “Molli holds any jewelry, phone, keys, gym gear, water bottle and face towel.”

What do you keep in your Molli?