As NYU’s artist-in-residence, Pharrell Williams (singer, rapper, and record producer) hosted a master class at the university’s Clive Davis Institute of Recorded Music back in March. During this class, Pharrell listened to the students’ projects while giving them guidance on how to improve and become successful within the music industry. He encouraged the students to keep working and striving toward their dreams while also giving them some constructive criticism. There were about four students who participated in the class. However, the music that was made by one of these students in particular stood out the most to Pharrell, moving him to the verge of tears. That student is Maggie Rogers.

The song “Alaska” is the song that Maggie Rogers had Pharrell listen to during the master class. Rogers stated that her song, Alaska, was inspired by a hiking trip that she had previously gone on.

“When I had been hiking in summers after Alaska, I had been creating a natural sample bank of birds, noises. A good chunk of the rhythm, in the song started from me just patting a rhythm on my jeans.”

When listening to Alaska, the bird noises that Rogers talks about are very clearly heard throughout the song. When introducing herself to Pharrell, Maggie Rogers explained how she had been raised in a very rural town and has been surrounded by nature for most of her life. This sense of being experienced with nature has been able to give Maggie the resources  and experiences she needs to make a connection between nature and music, creating the folk-dance genre that Rogers aims to withhold in her sound. After listening to Alaska, Pharrell told Rogers that he could truly hear her story all throughout the song. This is exactly what Rogers hopes to achieve with her music, telling her story. Coming from such a rural environment and then taking a chance by going to school in a major city was a tremendous change for her as the two environments are completely different from one another, which is why Maggie Rogers makes music that can be categorized as a sort of folk, dance hybrid. Folk music represents Maggie Rogers’ life back in her rural hometown where she played the banjo and worked on her farm. Dance and pop music represent her life in the big city of New York, where she thrives and is able to make music to her full potential. Rogers also states that she was further exposed to and inspired by the art of dance while studying abroad in France. Being able to connect two genres of music that are so unique to one another just proves how talented Maggie Rogers really is. “I wanted [my music] to sound as human as possible”, says Rogers. Pharrell was able to hear the talent behind Alaska right away and told Rogers that she would excel tremendously. Directly after the master class, Pharell tweeted about Maggie, expressing his excitement about her talent and her future. 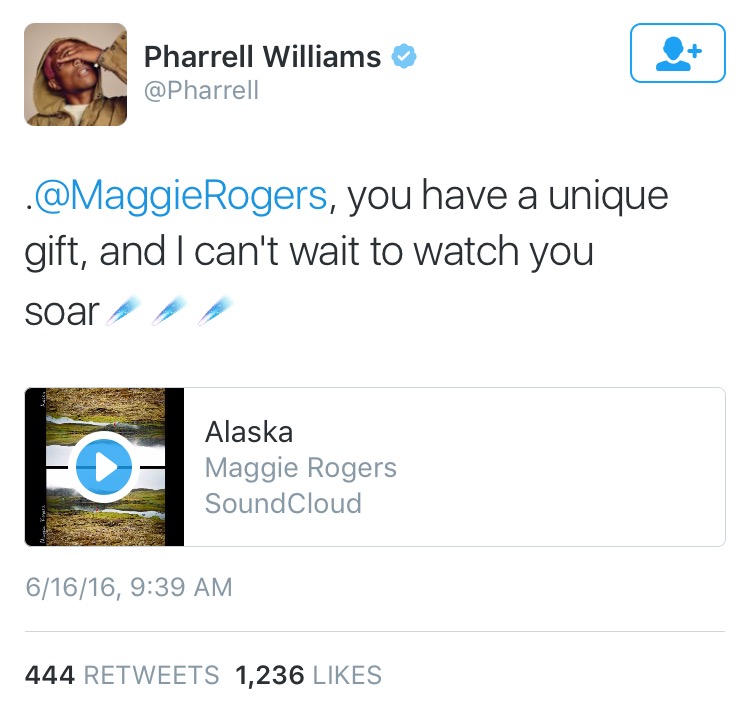 Maggie Rogers’ single Alaska is available on all major streaming services including Soundcloud, Spotify, and iTunes. This is definitely a song worth listening to.

Determining The Fate Of The V-Neck